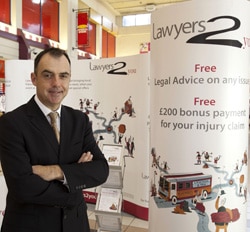 Guy Barnett and a Lawyers2you stand in their Blakemores days

Lawyers2you, the shopping centre-based marketing brand previously owned by failed Birmingham firm Blakemores, has been resurrected and relaunched with the first two stands open for business this week, Legal Futures can reveal.

The business – including a database of 175,000 consumers – has been bought by Assure Law, the legal consultancy best known for its work turning around Manchester firm Linder Myers. It is being run by Guy Barnett, former chief executive of Blakemores who has been a director of Assure Law since January.

Though the Solicitors Regulation Authority intervened in Blakemores in March 2013 – a decision that Mr Barnett still contests – Lawyers2you was seen as a successful part of the business, generating half of Blakemores’ £10m turnover.

Having received authorisation from the Ministry of Justice’s Claims Management Regulator this week, the first two pilot marketing stands have opened in the Paradise Forum in Birmingham and the Treaty Centre in Hounslow, west London.

They will be followed by stands in Woking, Leicester and Wolverhampton over the next three weeks. If the pilot is successful, the plan is to scale up quickly in the new year and have 50 across England and Wales by the end of 2015.

The model has changed and each stand is now co-funded by four or five different legal businesses so as to share the cost. It is hard to make stands work when they are just promoting a single area of practice, Mr Barnett explained.

“We’re clear on the stand that we’re not a law firm,” said Mr Barnett. “We’re a co-ordinator for consumers’ legal problems.”

He said the association with Blakemores had not harmed Lawyers2you’s reputation in the profession, claiming there is a “massive appetite” for it because the model brings down the cost of case acquisition so much.

For example, he said an average stand would cost a personal injury firm up to £4,500 a month. For this it could expect around 50 leads, of which 15 would convert into fee-paying cases – a cost per case of £300. This is lower than personal injury firms are paying now with other schemes, Mr Barnett said.

He maintained that the Blakemores intervention was not merited and that the SRA should have given the firm more time to implement the wind-down strategy that was put in place once a private equity buyer that had primarily been interested in Lawyers2you, but was prepared to buy the whole firm, pulled out because of concerns about billing levels at Blakemores.