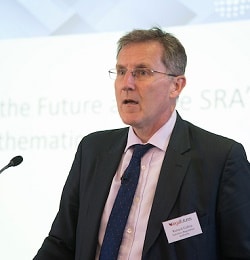 Collins: New executive director of the profession at RICS

Richard Collins, who took on the role at the start of the year after Crispin Passmore left, is joining the Royal Institution of Chartered Surveyors (RICS) as executive director of the profession.

Chief executive Sean Tompkins said: “Richard will report to me and have global responsibility for driving forward our agenda in setting the highest standards and ethics, furthering the influence of the profession, while continuing to build trust with all stakeholders through the quality and independence of our regulatory assurance.

“He will also oversee our standards of entry into the profession.

“He brings a wealth of experience from a professional sector that has undergone intense change over the years and we are excited to have him join our team.”

Mr Collins joined the SRA in 2010 and had been executive director for strategy and resources. Following Mr Passmore’s departure, he was named as the executive director leading on policy, education and anti-money laundering as the regulator moved into the implementation phase of the new rulebook and education reform programme.

An SRA spokesman said it was coming to the end of its three-year strategy and that its board “will be engaging in the thinking about the next three years”.

He added: “The executive structure to support board business will be considered later in the year.”

Meanwhile, the Legal Services Board (LSB) has begun recruiting a successor to chief executive Neil Buckley, who is retiring from full-time work this summer. The successful candidate will receive a salary of up to £150,000, a performance-related bonus and a pension allowance.

The recruiter said the next person in the role “will lead the organisation through a period of unprecedented economic, social and technological change, ensuring that the legal sector meets the needs of consumers with the highest levels of integrity, competence and professionalism”.

The appointment panel is made up of LSB chair Dr Helen Phillips, board member Jemima Coleman, chair of the LSB’s remuneration and nominations committee, independent member Lambert Allman, and Annabel Burns, director of judicial and legal services policy at the Ministry of Justice.

Liz Owen has been appointed for a four-year term, Paul Crook for a three and a half-year term, and David Abbott and Owen Derbyshire for three-year terms.

Panel chair Sarah Chambers said: “They each bring essential skills and significant experience to the panel’s work, in particular in relation to vulnerable consumers and digital transformation.

“They are in a strong position to contribute immediately to our forward-looking work programme in the interests of the users of legal services.”

David Abbott is currently chief executive of the Free Representation Unit. Prior to this, he was deputy director of future customer experience at HM Courts and Tribunals Service. Mr Abbott was chief executive of High Peak Citizens Advice Bureau for more than a decade.

Paul Crook has a background in business/digital transformation and strategy consulting. His most recent activity has included senior executive roles at Amazon Web Services, DXC/HP Enterprise Services, IBM, Fujitsu Services and as a full equity partner at Accenture.

Owen Derbyshire’s background is in communications and technology. He is currently director and principal consultant at Twenty One, a management consulting firm based in Cardiff specializing in digital transformation. His non-executive roles include being a director of Welsh broadcaster S4C.

Liz Owen is currently director of policy and strategy at the Care Quality Commission. Among her previous roles was head of customer insight at the Department for Energy and Climate Change.

The roles each carry a non-pensionable remuneration of £4,500 for at least 15 days’ work per year.