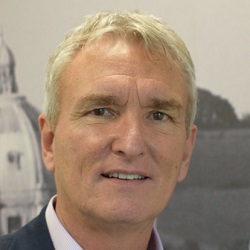 Roberts: The idea’s time will come

An American company that sought to bring subscription-based legal services to the mainstream consumer market in the UK has shuttered its operation after less than two years, Legal Futures can reveal.

A failure to replace Slater & Gordon (S&G) as the provider of legal advice, as well as the impact of Covid, put paid to the venture, which went into liquidation earlier this month.

LegalDefence was the first overseas venture by LegalShield, which has 1.7m subscribers to the product in the US.

The app offered users the full range of consumer legal advice and support for up to £24 a month was rolled out in July 2019 [1] following a pilot saw 70% of users renew their subscription.

The legal advice came from S&G, supported by an artificial intelligence-based chatbot called Gordon. It was available 24 hours a day, seven days a week, and also provided access to a range of legal documents.

A LegalShield spokeswoman said: “The business closure followed the decision by Slater & Gordon Lawyers UK, our legal service providers, to change strategic direction, meaning they were no longer be able to provide legal services to our members.

“Although strenuous efforts were made to find an alternative provider, they failed to identify a viable offering, and so the UK board of directors decided to cease UK operations.”

An S&G spokesman said: “We ran a pilot scheme with LegalDefence to offer legal services, which has now ended.

“This was one of a number of initiatives that we have run over the past few years to explore different ways of meeting changing customer demands.

“What we learned during this process has been incorporated into an entirely new digital product, designed from the ground up, to offer a new way for customers to access legal services.

“The first service will help motor injury victims – who are likely to be deterred by the new litigant in person portal – pursue a compensation claim, and will launch ahead of the whiplash reform.”

Mike Roberts, who headed the UK operation, stressed that it had been shut down properly, with all debts paid, leaving the door open for LegalShield to re-enter the market should it want to in the future.

He explained that the law firms he had spoken to about replacing S&G at the end of last year were wary of trying a different way of delivering legal services – even though LegalShield had offered to help them with the investment needed – and also unwilling to commit given it was during lockdown.

The pandemic had also meant that fewer people subscribed than expected – around 1,500 signed up to LegalDefence, and a slightly larger number to PrivacyDefence, which protected consumers against identity theft.

While as a service it was “working”, the numbers were not enough for LegalDefence, and PrivacyDefence was not viable on its own. “The only sensible decision was to close the business and place it into liquidation,” Mr Roberts said.

He reflected: “If I did it again, I would start with the small business side of things – small business owners already have a need for legal services. That’s an easier place to start than looking to create a need in eyes of consumers and then supply an answer to it.”

But Mr Roberts said he remained convinced that the time would come for subscription legal services like this in a few years, as those consumers for whom subscribing to apps as a way to access a service is becoming everyday got older and took on responsibilities that might drive them to a legal advice service.

Legal helplines and online documents are often packaged up into employee benefits schemes, trade union benefits and legal expenses insurance, while there are a few, mainly small-scale, subscription services, most notably offered by Which?.

The Legal Services Board has identified legal expenses insurance [2] as a possible way to handle unmet legal need.