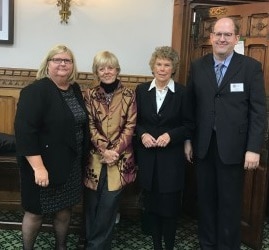 One of the two paralegal bodies which developed the Professional Paralegal Register (PPR) to act as a voluntary regulator for the sector, has decided to pull out after only two years, it has emerged.

The National Association of Licensed Paralegals (NALP) withdrew this summer, citing “irreconcilable differences” over the values and purpose of the PPR.

The PPR has responded by saying it was “shocked and saddened” by the NALP’s actions in deciding to promote its own rival licensing scheme.

The NALP, together with the Institute of Paralegals, set up the PPR in 2015 as a direct response to the Legal Education and Training Review’s call for a regulator to come forward for the unregulated sector.

Paralegals can only join through recognised membership bodies, of which at the moment there are three: the Institute of Paralegals, the Chartered Institute of Arbitrators and the Association of Probate Researchers.

It has four tiers of membership, depending on qualification and experience. Those offering legal services to the public, and not in the first tier, can apply for practising certificates that allow them to go by the title of ‘professional paralegal practitioner’. They must also have at least £1m in indemnity insurance.

Rita Leat, managing director of the PPR, told Legal Futures that in terms of members, the NALP was a “much smaller” organisation than the Institute of Paralegals.

“Quite a high percentage of NALP members have decided to stay being regulated by the PPR since the split. They have either joined the Institute of Paralegals or some other professional body.

“It is not nice having a split sector, but the ball is in the NALP’s court. Our door is always open to applications.

“I would like to see all the paralegal bodies sign up to the PPR so we can unite the sector. It’s the biggest sector in the legal services market place, but it’s so diverse and disparate, it needs to be together.”

Ms Leat, a former chief operating officer of the NALP, went on: “We are the only body that has a full regulatory scheme, and can offer compensation. It is unfortunate that the NALP decided to continue with self-regulation, which is not ideal.”

The PPR currently has around 2,000 registered paralegals. Ms Leat said she was talking to two associations interested in joining in the PPR, but could name only one of them, the Society of Will Writers.

She said both applications were at the due diligence stage and one could be approved by the end of the year.

She predicted that by the summer, the PPR would have doubled its numbers, if not “doubled them again”.

Amanda Hamilton, chief executive of the NALP, pointed out that her organisation was established in 1987, some 16 years before the Institute of Paralegals.

A spokesman for the Society of Will Writers confirmed that the society was “deliberating as to whether we see value” in joining the PPR.

The PPR held a meeting at the House of Commons last week, hosted by Kate Hoey MP and attended, among others, by Kathryn Stone, the chief legal ombudsman.

Ms Stone said: “The Legal Ombudsman is keen to see efforts being made to enhance consumer protection in this sector. We applaud the PPR for providing voluntary regulation to maintain high standards among paralegals.”

Ms Hoey said: “I was very pleased to host this important event. Paralegals will become more and more essential for the public seeking help and legal advice.

“I am impressed with the co-operation between all the various legal agencies and want to see the PPR continue to grow as the voluntary regulator for those providing unregulated legal services”.

At the event, one of the PPR’s patrons, Derek Wood QC – well known for his review of training at the Bar – launched a supporters group, with the Legal Ombudsman, Which? Legal and The Citizenship Foundation among those to sign up.

Ms Leat added: “We need to grow the numbers so we can market ourselves to consumers and warn them against unregulated providers.

“Until LeO gets an extension to its jurisdiction [to cover paralegals], which is unlikely for the next three years, there’s really nowhere else for them to go.”

Mr Wood said: “It would be quite inaccurate to suggest that paralegals offer a fall-back or second-class service for clients who cannot afford to turn to a solicitor or barrister.

“They offer front-line high quality bespoke advice and representation at affordable prices and make a major contribution to the administration of justice. They are guided by the ethical values which pertain across the whole of legal practice.

“I have been deeply impressed with the sheer diversity of legal expertise deployed by PPR members, and their commitment to serving clients in the field of specialism which they have developed.”

He urged all stakeholders and organisations with members or employees who were paralegals not regulated under the Legal Services Act 2007 to join the PPR: “Our increasing body of paralegals in England and Wales need the professional and ethical support and guidance which the PPR can offer.”