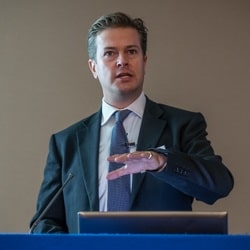 Maxwell Scott: Fragmented nature of the market is a weakness

A new organisation looking to bring together and speak for all those involved in supporting claimants in the civil justice system is formally launching tomorrow, Legal Futures can reveal.

Executive director Matthew Maxwell Scott said the aim was to bring together “some of most reputable and consumer-focused organisations in the sector”.

Though initially focused on personal injury, Mr Maxwell Scott said ACSO aimed to have a wider brief, such as those with financial mis-selling claims: “We’re about representing consumers who are claimants in the civil justice system and those who represent them.”

It was, he added, “about being very consumer focused and commercially minded as well. We have to do above all what is in the consumer interest, but bearing in mind that our members are commercial businesses”.

ACSO is the spiritual successor to Access to Justice (A2J), the body that campaigned against what is now the Civil Liability Act 2018 and is being wound down. Mr Maxwell Scott was a director of A2J too and was also director of government relations at Slater & Gordon.

ACSO’s other two directors are solicitor Charles Layfield, a well-known figure who was most recently legal director of Minster Law and before that a partner at Pannone, and Ben Welsh, founder of public relations and public affairs business Certus Communications Consultants. Both were also heavily involved in A2J.

ACSO has set up various working groups. It has taken on the vulnerable road users group set up by A2J, whose members include Cycling UK, British Cycling, Brake, RoadPeace and Living Streets.

A legal expenses insurers group is already working with liability insurers – and has ACSO members sitting alongside LV=, Hastings, Direct Line and Admiral – while further groups cover the Civil Liability Act, clinical negligence and the regulation of claims management companies.

The inspiration for ACSO is the trouble claimant groups had influencing both the 2018 Act and before that part 2 of the Legal Aid, Sentencing and Punishment of Offenders Act 2012, particularly when compared to the Association of British Insurers (ABI).

Mr Maxwell Scott said: “We’ve seen in recent times the claimant sector not doing as good a job as it might have done in representing itself with politicians, policymakers and the media. The result is consumer detriment.”

The lesson from the Civil Liability Act, he continued, was the importance of “getting in there first and pre-empting policies”.

A2J put forward an alternative claims framework that recognised that the claimant sector needed to address certain shortcomings; the problem, Mr Maxwell Scott said, was that the government had already set its policy by then.

Had A2J existed earlier, he speculated, the Act either would not have happened or “would have happened in a much better way. But we’ll never know”.

Mr Maxwell Scott criticised the reaction of other claimant bodies to the policy, which he characterised as “a lot of stamping of feet and saying ‘this isn’t fair’ rather than coming up with alternatives”.

The framework was “grown up”, he argued. “It recognised that we needed to give some ground.”

Having tried to learn the lesson of the failed LASPO campaign – where there was little co-operation until the legislation had almost finished its passage through Parliament – the Law Society, Association of Personal Injury Lawyers and Motor Accident Solicitors Society formed the so-called ‘strategic alliance’ in a bid to co-ordinate their approach to the Civil Liability Bill.

Mr Maxwell Scott said: “It was welcome that they attempted to work together but the reality is that, when you’re dealing with three different bodies set up in different ways with their own membership and own constituents to satisfy, it’s extremely difficult to come up with dynamic campaigning activities.

“It foundered on the harsh reality of getting three different bodies to work together for a single aim.”

He added that “ACSO would not exist if the strategic alliance had achieved what it set out to”.

But this failure highlighted “the gap in the market” that ACSO is now trying to fill. “They’re just not set up to do what we’re set up to do,” Mr Maxwell Scott said.

“The fragmented nature of the market is a weakness in terms of public policy and media. If you look at the insurers, the ABI is a powerful, coherent and professional organisation that manages to make members who have a lot of different views speak with one voice.”

ACSO’s focus is on lobbying, and influencing both the public policy debate and the media – and it will not be shy in calling out wrongdoing on the claimant side as well as the defendant.

But why should politicians, policymakers and journalists listen? “If you are saying better things, more clearly and in a more timely fashion, your voice will rapidly become the one that people listen to,” he insisted.

ACSO is now looking to bring more members on board and build relationships with other trade bodies – such as the Credit Hire Organisation and Association of Medical Reporting Organisations – with a promise not tread on their toes by putting on training and development or other commercial events.

Already working with defendant insurers, Mr Maxwell Scott said he wanted to help them “up their game” too.

“They have a serious trust deficit… Their pursuit of margin in quite a challenging market risks a hollowing out of the claims process.”

He predicted that insurers would not settle for the Civil Liability Act. They would seek to bring the planned £2,000 small claims limit for employer’s and public liability claims in line with the £5,000 being introduced for road traffic claims, and then move on to campaign to align that figure with the non-personal injury £10,000 small claims limit.

Also on the agenda is the long-awaited Ministry of Justice response to part 2 of the 2016 consultation that led to the Civil Liability Act. Covering areas such as credit hire and rehabilitation, this is expected to be published by the end of 2019.