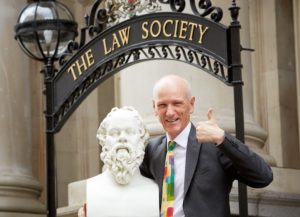 The Law Society has settled the case that saw the Competition Appeal Tribunal (CAT) rule that that it abused a dominant position, Legal Futures can reveal.

The details of the agreement on damages and costs are confidential, which was criticised by the director of Socrates Training, the successful claimant, who also questioned the Law Society’s behaviour throughout the matter.

However, the Law Society has defended its position stoutly.

The CAT upheld Socrates’ claim that the society had abused its dominant position by requiring over 3,000 law firms to buy its own fraud training in order to maintain their Conveyancing Quality Scheme (CQS) accreditation – albeit not until five years into the scheme’s existence, at the point where the tribunal decided that CQS had become a “must-have” for conveyancing solicitors.

The parties had been given until September to seek agreement on quantum or face a return to the tribunal.

Socrates quantified damages in the claim form at £112,500, on the basis that the society’s conduct lost it the custom of 75 law firm clients that would spend some £600 each for two and a half years.

The tribunal had ordered the society to pay Socrates’ costs up to the approved budget of £230,000, to be assessed on the standard basis if not agreed.

Bernard George, a solicitor and Socrates’ director, said he was relieved the case was over. He suggested it was “odd” for a representative body to want to keep the amount it had to pay to settle the case confidential from its members.

He continued that the society had behaved “badly” from start to finish.

“First it sought to rig a competitive market, to the manifest disadvantage not just of training businesses, but of law firms. Second it raised spurious defences and supposed justifications, presumably in the hope that we could be discouraged from pursuing a claim they must have known was well founded.

“Third they put forward flawed evidence, which attracted strong criticism from the president of the Competition Appeal Tribunal.

“It has been a long, expensive and stressful process, to make our own professional body obey the law.”

Mr George said he had been sustained by “countless” messages of support and goodwill from law firms.

He continued: “It would be nice to think the Law Society has learned something from all this, and will now make changes to its governance and accountability systems to ensure this sort of debacle cannot be repeated. Sadly there is no sign of this.

“Certainly we have received no apology, and neither has the long-suffering profession, whose money was wasted in the doomed attempt to defend the indefensible.”

In response, a Law Society spokesman noted that tribunal had not disputed the fact that training should form part of the CQS.

“Nowhere in the judgment does the tribunal make any finding or contention that the Law Society deliberately sought to profiteer from the sale of CQS training,” he said.

“The case on liability was not clear cut. The tribunal accepted that from its inception in 2010 until the end of April 2015, the CQS was operated by the Law Society in compliance with competition law.

“As is clear from the judgment, however, the point at which the Law Society was found to have assumed a dominant position in the market place, and therefore ought to have opened up the anti-money laundering, mortgage fraud and financial crime training modules to third parties, required a difficult judgement.

“‎The tribunal itself took six months of deliberation to reach its judgment on these difficult issues. This amounts to longer than the entire period from the issue of the claim form to trial and reflects the legal and econometric complexities of the case.”

The spokesman insisted that in defending the claim, the Law Society acted in the interest of the profession and in the public interest to ensure consumer and lender confidence in conveyancing transactions through CQS.

“The society also considered that it had a sound legal defence to the claim under competition law and its decision to defend the case was ultimately vindicated by the tribunal finding in its favour in respect of the majority of the time period in dispute.

“Both the costs of the case and any damages were covered by the Law Society’s professional indemnity insurance.”

The society is currently in the process of restructuring the training component of the CQS in light of the tribunal’s judgment, he added.