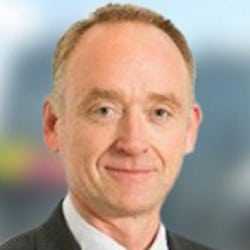 Philips: Sold up with a heavy heart

The private equity investor who set Keystone Law on the road to listing is on the look-out for a new legal venture – but is not interested in traditional law firm partnerships.

Root Capital invested in Keystone six years ago – receiving 35% of the business in return for £3.15m – and since the pioneering dispersed law firm listed on AIM in November 2017 has been steadily selling its stake.

It is now about 1% and managing partner Simon Philips said he would have happily held Keystone’s stock for the “very long term”. He has sold up “with a heavy heart”.

“But when you run a fund, you’re expected to realise and exit your investment during its lifetime,” he told Legal Futures in an interview.

It has undoubtedly paid off too – Keystone listed at 160p and reached 615p by February this year, before the impact of Covid-19 sent them diving like the rest of the market. But from a low of 390p in March, they closed yesterday at 480p.

Mr Philips described Root Capital as “scale-up investors”, helping companies to move from founder-led operations to professionally run businesses. “A lot of businesses struggle to scale up and plateau out instead – they don’t develop the management, or processes and systems, or technology.”

Keystone was “already a fabulous business” with first-mover advantage when he became involved, Mr Philips said, “but I like to think we helped”.

More and more firms have set up over the past decade with similar models of senior lawyers working as self-employed consultants with back-office support and keeping the majority of the fees they generate.

Mr Philips predicted that scale was what would keep Keystone at the forefront. “Central office is a big investment and cost and that’s what provides the lawyers with a fantastic service.”

As the firm grew, so did the economies of scale and “to create that from scratch would cost many millions of pounds”.

He also highlighted the “very strong community” Keystone has developed, which means there is a flow of referrals across the network. “A start-up can’t offer that.”

“Even though the model is different, Keystone is a proper law firm with aspirations to become a brand.”

Mr Philips said he has been approached by other law firms. “I’m keen on the legal sector but it is a challenge to hunt out these investable business models.”

He is interested in legal process outsourcers, technology business, information providers or “more specialist” law firms that handle process-type work – but not corporate law or litigation.

Nor will he be looking at traditional partnerships. “I don’t think it’s an investable business model,” he said. “As soon as you have external shareholders, by definition they will be taking a share of the profits, so the partner group will earn less.

“Unless you’re going to use the money you raise to develop technology or something else in the business to increase your return on capital, it’s a story that’s going to end badly.”

There are traditional law firms now listed on the stock exchange, but Mr Philips has his doubts about their long-term viability. “You can probably can square the circle when the share price is going up because all the partners, particularly the first generation, are shareholders.

“But as time goes by and that generation are no longer the major billers, as soon as the share price goes down I suspect those partners who at that point are not huge shareholders but generating most of the income while earning less than in traditional private practice, will leave. You could then have a vicious circle.”

Listing was a good move for Keystone because it raised the firm’s profile, which as a disruptor was valuable.

But the existing big firms have “very successful business models without all the headaches and hassles of being listed”, he noted.

Keystone co-founder and chief executive James Knight told Legal Futures that the firm would not be where it was today without Mr Philips – having private equity on board when going to the public markets was “very helpful”.

“For us it’s been a wonderful experience. It provided [co-founder] Charlie Stringer with a means to exit, it provided know-how and gravitas that got us to the next step, which was IPO. Simon has been a business partner and a very knowledgeable one.”

The listing was with an eye to Root Capital exiting, if not immediately, and Mr Knight said he had been wary of bringing in a different private equity investor instead, because he thought it unlikely to repeat the success of their relationship since the firm had grown.

Indeed, for those who are not keen on having an external voice weighing in on decisions, listing is preferable, the solicitor suggests.

“So long as you deliver on your promises, which we’ve done, the public markets are incredibly benign and non-intrusive.”

Keystone has several significant institutional investors, but not at such a level that they are involved in decision-making. Indeed, liquidity of the firm’s shares – around 55% of which are tradable – is something of an issue because these investors seem happy and are holding onto their shares.

Mr Knight described the Keystone model as “ideally suited” to private equity and listing. “There are not many law firms where the senior lawyers are not partners and so not in it as a revenue play.”