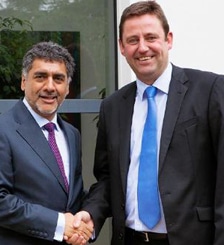 Mr Caan, who rose to public prominence as a star of BBC’s Dragon’s Den, invested in Knights in 2012, since when the firm has grown its turnover from £8m to £40m and added complementary services to its core legal offering.

It reached the stated target at the time of the deal of becoming a top 100 law firm within three years.

The website of Hamilton Bradshaw – Mr Caan’s investment vehicle – now marks his investment in Knights as ‘sold’, and documents filed earlier this month at Companies House record that a £4.5m floating charge that he and other investors held over Knights has been discharged in full. Mr Caan had the largest share, £2.7m. David Beech, the CEO of Knights, is now the firm’s principal owner.

Speaking to Legal Futures, Mr Beech confirmed the deal and said there had been a “series of transactions” over the last two years culminating in the satisfaction of the charge, which he said was normal with private equity – as was an exit after four years.

Though he declined to say if Mr Caan and the other investors had made a profit, Mr Beech said it was “a friendly parting of the ways”. He said the firm had benefited from working with an “entrepreneurial investor” and from the publicity that the deal had generated.

Hamilton Bradshaw has not yet responded to a request for comment.

Mr Beech observed that having a proper business structure – with ownership separated from management – meant that Knights avoided the “politics… you inevitably get when partners who work in the business exit”.

He added: “In other words having the ownership outside of the law firm – as is normal in all other sectors – is extremely healthy for the business day to day.”

He suggested that a partnership-led law firm could not have achieved the growth Knights has in the past four years, given the politics, conflicts and internal competition that equity partnership creates.

Mr Beech did not rule out accepting more investment in future, saying that funding was “very important” to keep up the growth by recruitment and acquisition that Knights has managed since 2012. The next four years would be “more of the same”, he predicted.

It has expanded geographically into what the solicitor described as “secondary locations” – such as Derby and Chester – acquired Oxford-based Darbys, and brought in non-lawyers to broaden the service, hence the change of name in early 2015 to reflect that the firm offers various professional services.