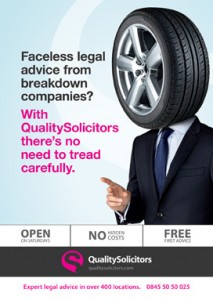 QualitySolicitors (QS) this week launches its public attack on ‘faceless’ legal advice provided by new entrants to the legal market and national law firms, with a series of posters across 1,000 billboard and poster sites.

The campaign will also include national press advertising, online promotion and physical ‘stunt’ activity in a number of cities, together with a ‘Keep solicitors local’ initiative that will be open to non-QS firms as well.

Chief executive Craig Holt said that the extensive reach of the campaign, combined with its continued TV advertising, will “ensure we move closer and closer to our aim of being the first ‘household name’ legal brand”.

The campaign pack, which will be available from a dedicated website, will include a range of material for law firms – including non-QS firms – to promote local solicitors to the local community, including window stickers, posters and flyers. 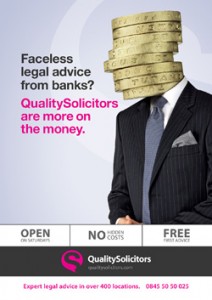 Mr Holt explained: “The message of the TV advert is one focused on the emotional aspect of legal services, which frequently touch some of the most important times of our lives. This campaign builds on that by parodying in a light-hearted fashion the inappropriateness to the seriousness of many of those situations of the ‘faceless’ legal advice provided by many of the new entrants and ‘national’ law firms.”

He argued that the public are becoming “increasingly aware” of the widening range of options in the legal services market and “we feel the time is right to take steps to communicate to them the invaluable benefit of having the opportunity, even if they don’t take it up in a particular case or transaction, of face-to-face interaction with a local lawyer, whatever the legal issue”. 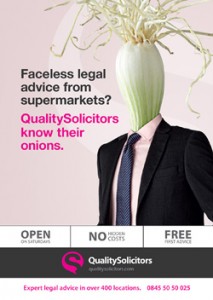 He drew on his experience as a family law barrister to highlight how face-to-face advice can make the difference between a successful and unsuccessful outcome: “Video-conferencing or telephone call might have its place but it is no substitute for the opportunity for that in-person interaction.”

Mr Holt continued: “Whilst QS will offer the public as many options as possible in how they engage for legal services – including online via our LegalZoom partnership – the option is always there to be able walk down into your local town/city centre and speak to the lawyer and that is vital to an effective legal service.”