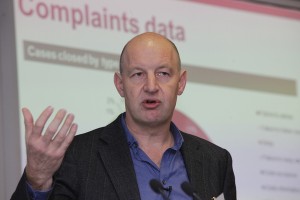 The Chief Legal Ombudsman, Adam Sampson, has resigned from his role after a controversy about travel expenses meant his organisation’s accounts are likely to be qualified by the National Audit Office.

Even though an investigation carried out by City law firm Simmons & Simmons is said to have found that he acted with good intentions, Mr Sampson confirmed to us yesterday that he had resigned from the role he has held for five years.

He said: “I have resigned because although it is clear from the independent report and all the scrutiny of my expenses claims that I have not been dishonest and my integrity is intact, an ombudsman must be a figure above controversy. I do not want issues around LeO’s accounts to distract from the tremendous work that the organisation does.”

The Ministry of Justice confirmed to us that last Thursday it suspended Mr Sampson from his role as the organisation’s accounting officer, “following an investigation into concerns raised about governance issues”. He has been temporarily replaced as accounting officer by the ministry’s permanent secretary, Ursula Brennan.

We are told that Mr Sampson was already in the process of resigning when this occurred.

This has all happened even though the report by Simmons & Simmons – called in to conduct an independent investigation – is said to have found that no individual behaved with any impropriety and instead acted with the best of intentions.

The issue relates solely to an arrangement around Mr Sampson’s train expenses claims, totalling around £20,000 over five years.

When he became chief ombudsman, Mr Sampson was unwilling to relocate his family from London to Birmingham, where LeO is based. Mr Sampson would instead travel to Birmingham every Monday and stay in a hotel, all at his own expense. However, with meetings and other demands taking him to London for one or two days a week, LeO would cover the cost of his train fares to and from the capital; in London, he stayed at his home and did not claim accommodation expenses. When he left Birmingham each Friday, he again paid for the train himself.

Even though LeO’s accounts have been signed off by the NAO for the past four years, its attention has been drawn to this arrangement, which it has described as “novel and contentious”, because it appears to pay Mr Sampson for travel from home to work and back again. This also raises tax issues. The NAO says the arrangement should have been approved by the Ministry of Justice.

There was a secondary issue about credit card statements not being properly signed off, although again there is no suggestion of over-claiming.

The then chair of the Office for Legal Complaints – the body that oversees LeO’s operation – was Elizabeth France, and she left the post before the NAO became interested in the issue, although she was interviewed for the Simmons & Simmons report.

She confirmed to Legal Futures that she took the decision to approve the arrangement, following careful thought, “because I believed it was a pragmatic interpretation of the travel and subsistence rules”. She said that if anything it saved money.

Ms France said that though the decision was openly minuted, and shared with the office’s remuneration committee and finance director, she did not seek approval because she did not think it was either novel or contentious.

“I’m not aware of anything that questions Adam’s integrity,” she added.