Exclusive: Apprentice Alex gets ready to fire up Dynamo Legal 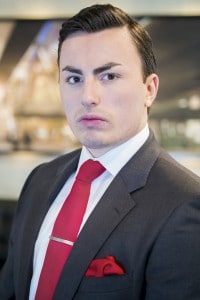 Alex Mills and his famous eyebrows get ready for legal business

Alex Mills, who was last week fired from The Apprentice, has told Legal Futures that his fledgling brand Dynamo Legal has a six-month window to capitalise on the publicity his stint on the BBC show has generated.

His famous eyebrows – which even have their own Twitter account – are already forming part of its branding; Dynamo has also recently added a service for financial mis-selling claims with a picture of Mr Mills and the slogan: “All the confusion raising a few eyebrows?”.

As first reported on Legal Futures in April, Dynamo is looking to recruit 245 law firms across England and Wales to its collective marketing scheme and build a £7m advertising warchest.

Lord Sugar fired the 23-year-old and ended his hopes of a £250,000 investment in Dynamo after losing a task to create a ready meal. In the boardroom there were questions over what he knew of the law and about having a “bit of a grasshopper brain” – having initially set up and sold a slate sign company, before investing in a CCTV business and launching Dynamo.

Lord Sugar sent him on his way with advice that if he focused on a particular project, “you’re going to succeed”. On the companion show The Apprentice: You’re Fired, the entrepreneur added: “Alex is a young man with many admirable qualities but he didn’t stick to his guns on this task.”

Mr Mills said he had taken Lord Sugar’s advice to heart and had now disposed of his interest in the CCTV company (the episode was shot some months ago) to focus solely on Dynamo – he said he had only invested to secure some income while Dynamo got on its feet.

The initial plan had been to pilot Dynamo with 20 firms in South Wales and 30 in the south-west in May, but that was put on ice because of the show, with Mr Mills acknowledging that had the makers showed him in a negative light, it would have done a lot of damage to the business. “The Apprentice can make or break people,” he said.

As it was, he felt the exposure had been positive and Dynamo has had to turn down requests for legal help over recent weeks that came from the connection with him because it was not ready. The pilot will now begin next month.

Mr Mills said the show had also helped the talks Dynamo is having with potential member firms because they knew something about him, rather than it being a cold approach.

“We’ve got a six-month window to capitalise on the opportunity [arising from the publicity],” he estimated. “We see ourselves as a strong, effective and unique form of branding for the legal profession.”

He added that the aim was to make the law more accessible to the public. “We all know that dealing with a solicitor is not as complicated as the public perceives it.”