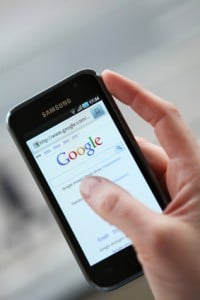 Slater & Gordon’s series of acquisitions is set to topple the likes of Irwin Mitchell and Thompsons and gain it the leading position in the hugely competitive online personal injury (PI) market, an analysis seen exclusively by Legal Futures has found.

Digital marketing agency Stickyeyes [2] said that, so far as Google visibility is concerned, Slater & Gordon will be catapulted to the number one spot once the rankings of Pannone and Simpson Millar are taken into account.

S&G’s acquisition of the former [3] is due to complete in February, but the latter is currently on ice.

Glen Conybeare, chief commercial officer of Stickyeyes, said: “This [result] is directly linked to the acquisition of Pannone, which has some good rankings for a number of the high volume terms.”

Stickyeyes looked at the top 25 PI search terms by volume (for example, ‘no win no fee’, ‘medical negligence’, ‘personal injury claims’, and ‘no win no fee solicitors’), and where each unique domain appeared in Google (ignoring non-legal businesses). Based on this, it attributed a percentage of the total click-share.

While currently Thompsons, with 16%, is marginally ahead of First4Lawyers and S&G, the acquisitions would take S&G to 21% of the click-share.

For those web users who search for a brand rather than a generic search term, Irwin Mitchell currently dominates, and is searched for nearly twice as often as its nearest competitor, National Accident Helpline, and more than four times as often as S&G, the sixth most searched-for name.

But the combined Slater & Gordon group, again including Pannone and Simpson Millar, would see S&G move ahead of Irwin Mitchell.

Mr Conybeare said: “So it does appear that overall Slater & Gordon will become a dominant force. Of course there are search terms where they do not fare so well; for example, none of their brands appear in the top 10 for the volume term ‘accident at work’.

“What will be interesting to see is how or whether they will amalgamate these brands over time as, in Google’s eyes, one plus one does not necessarily equal two.”