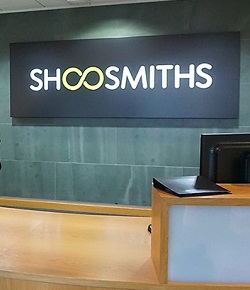 A Nigerian-born former administrative assistant at leading national firm Shoosmiths has been awarded damages for harassment after another member of staff standing by her desk said that “struggling immigrants should go back to their country”.

She was awarded £1,000 for injury to feelings by an employment tribunal, but her other claims of discrimination and victimisation over the handling and outcome of her subsequent grievance and dismissal were rejected.

The tribunal noted that there was some confusion about whether the comment made by a PA referred to ‘immigrant’ or ‘immigrants’.

Either way, the PA strongly denied saying anything and partner Barbara Rollin, who handled the grievance procedure over it, found that the remark was not made at all.

However, the tribunal in Manchester said counsel for Shoosmiths did not specifically challenge the claimant’s evidence about it.

The firm did not call the PA to give evidence. “Therefore the only evidence before us on the question of the alleged statement is that of the claimant.”

Also, without her evidence, it could not know the purpose of the words. It added: “It may or may not be relevant that in the grievance statement it is recorded that [the PA’s] father is Nigerian”.

The tribunal concluded: “We feel it was reasonable for the claimant to have been upset by the remark being made in her presence although not directly towards her.

Ms Sule did not appeal Ms Rollin’s decision not to uphold the grievance but told her: “This does not mean I am withdrawing the complaints but for the sake of peace and working relationship I will let it go for now.”

The tribunal recounted: “Ms Rollin took the view that the claimant was not letting go in terms of reserving the right to raise the matter again but was not wanting to appeal either, so she had to consider at [a follow-up meeting] how matters should proceed.

“They did not appear to be able to reach a way of working in the future and so it was her decision that the claimant should be dismissed from her employment.”

The tribunal said it could not find any evidence of discrimination in the course of the grievance process, which it considered was “full and fair”.

“The fact that the claimant did not agree with the outcome does not, in our view, mean that the respondent was in any way discriminatory.

“We take the view that based on the evidence before her, Ms Rollin could reasonably have come to the conclusion that she did, which was that in her mind the remark was not made. We do not find any connection between the claimant’s race and the process followed.”

It concluded that the reasons for the dismissal were not race but “because the events related to matters before and after the grievance and in particular the way in which the claimant was not able to let the matter drop whilst not appealing either.

“The respondent took the view that they could not continue to employ her and so they dismissed her, and given that the claimant had no right to bring unfair dismissal that was the end of that matter.”

A Shoosmiths spokeswoman said: “Shoosmiths went through the proper process and procedures and this was accepted by the tribunal.

“The claimant’s claims of discrimination against the firm were rejected. Despite approving of the process followed by Shoosmiths, the tribunal concluded that a single comment allegedly made to the claimant by a co-worker was an act of harassment and awarded compensation.

“This finding did not identify any flaw in our processes and policies, and it would be inappropriate to comment further on the judgment.”