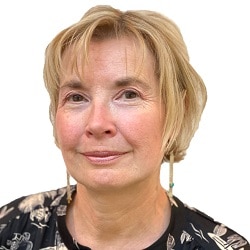 Humble: Solicitors in trouble are a strange bunch

The Solicitors Regulation Authority (SRA) needs to introduce a ‘fitness to practise’ regime as a better way to deal with young solicitors with mental health problems who find themselves in trouble, the former chief executive of the Solicitors Disciplinary Tribunal (SDT) has told Legal Futures.

Susan Humble was also critical of the regulator for “throwing the kitchen sink” at solicitors instead of prosecuting them more carefully.

She was last in private practice in 2000, when she was the marketing partner at insurance firm Greenwoods (which was later bought by Parabis), and she said she had “missed the buzz” of working at a law firm.

She is also chair of the Taxation Disciplinary Board, a lay panellist on the Teacher Regulation Authority’s professional conduct panel, and as of last month a member of the Tribunal Procedure Committee.

She joined the SDT as its clerk and chief executive in 2010 from ADR body Sports Resolutions, and said she had been keen on making it as good an experience as it could be for those facing proceedings.

“I went there with the intention of making it as comfortable as I could for them, being communicative with everyone so that whatever the outcome, people felt that the hearing itself has been fair.

“I wasn’t going to be able to achieve that in every single case but we did get emails from people saying they were disappointed with the outcome but were treated with kindness, courtesy and respect.”

But she also received death threats and wild accusations from solicitors.

“Solicitors in trouble are a strange bunch and at the SDT it’s particularly strange because, even if you’re a conveyancer, you still think you know all about regulation. You think you’re cleverer than the people dealing with you. If that’s your state of mind going in, then you’re going to find yourself in trouble. You have to have a bit of humility.”

The prosecution of young solicitors whose misconduct has come while working in bad working environments causing mental health issues has become a major talking point.

Ms Humble said she and the SDT pressed the SRA four years ago to introduce a non-disciplinary ‘fitness to practise’ regime [1] to handle health issues, which is provided for in the Legal Services Act 2007 but has not been activated.

She argued that the case for it has become “stronger” since the “very difficult” Sovani James case that sparked the debate (and which she clerked).

It was “hard when solicitors don’t see the firms who are offending being prosecuted and see juniors taking the rap”, she observed.

While not criticising the High Court for its appeal ruling in James [2] that the pressure of work or extreme working conditions “cannot either alone or in conjunction with stress or depression” justify not striking off dishonest solicitors, Ms Humble suggested that judges came from the old culture of the law where how loudly the senior partner shouted at you was a “badge of honour”.

Ms Humble criticised the SRA’s tendency to ‘over-prosecute’ and throw as many allegations as possible at solicitors, increasing the costs of cases and also slowing them down as a result.

“I was keen to make changes in the way cases were prosecuted and heard – I don’t believe in throwing the kitchen sink at cases and the SRA does do that,” she said.

“They have had bad experiences on appeals as a result. Have they learnt anything from those experiences? Honestly, I don’t think they have.

“The SRA’s task isn’t particularly easy but it’s made more difficult if you throw every allegation under the sun at an individual who is predisposed to be litigious, who’s fighting for their life – it’s asking how many times you need to kill the same person.

“If you get it right first time, if you’re very focused, methodical and analytical in your approach, you can see where you’re adding too much to the mix.”

It does, however, means there are cases where the solicitor is cleared of the main allegations but found guilty of one or two minor offences which, on their own, would probably not have justified a referral to the SDT. But this allows the SRA to report such a prosecution as successful, at least to a degree.

Ms Humble said the Leigh Day case, the biggest in the SDT’s history, was an example of the ‘kitchen sink’ approach causing problems, rather than – as the SRA subsequently suggested – what was then the criminal standard of proof.

Ms Humble said she was neutral on last year’s change to the civil standard of proof – in practice, it is unlikely to make much difference, she reckoned.

“As a member of the profession, I’m not afraid of being judged on the balance of probabilities. The more serious the allegation against me, the more cogent the evidence against me needs to be. It’s not about the standard of proof, it’s about the quality of evidence.”

She was also critical of the SRA moving from a panel of prosecutors to a sole provider of external advice and representation in the shape of south London firm Capsticks.

“Do I think it’s a good for a client to put all its eggs in one basket? No, I don’t. There are horses for courses and that’s why you have a panel.”