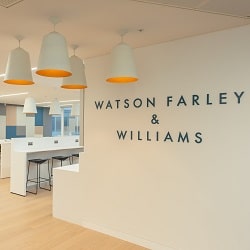 A former partner at City firm Watson Farley & Williams (WFW) has lost his High Court challenge to an arbitrator’s ruling that she had jurisdiction over a claim that he repay almost $68,000 (£52,000) to the firm.

Antonios Backos, who was based at the firm’s New York and Athens offices from 2008 to 2012, appealed against the decision that could see him repay the amount by which his drawings allegedly exceeded his entitlement.

He challenged the award of an arbitrator who decided that she had jurisdiction to determine a claim brought against Mr Backos by WFW under its LLP agreement.

Neither the arbitrator nor the court were considering the underlying merits of the case.

The $68,000 was the amount by which Mr Backos’s drawings on account of his share in the profits of the LLPs in the financial year to 30 April 2013 were alleged to have exceeded his entitlement, as later calculated in 2014 when the accounts were drawn up.

Mr Backos argues that he settled his account when he retired from the partnership and disputed the applicability of the arbitration clause on the grounds that he was no longer a member when the dispute arose.

The law firm referred the dispute to arbitration in 2016, with the award published in April 2018.

In Backos v WFW Global LLP and Anr [2019] EWHC 243 (Ch), Mark Anderson QC, sitting as a deputy High Court judge, supported the arbitrator’s decision on jurisdiction, saying he reached his decision “without reliance on any infelicities of drafting in the agreement”.

He noted that all the profits and drawings under scrutiny were earned and taken when Mr Backos was a partner.

“The dispute therefore falls squarely within the description of the disputes to which [the arbitration clause] applies, namely disputes ‘in any way relating to or concerning… the rights, duties or liabilities of any member’.

“In my judgment, it would strain language to deny that the dispute relates to the rights and liabilities of a member just because the membership has ceased before the facts emerge, or before the arbitration is begun.”

The judge said it was clear that the “commercial purpose” of the clause was to ensure that disputes between the LLP and its members should go to arbitration.

“I can see no commercial purpose in excluding disputes where the member has retired before the dispute arose or before the reference was made.

“Most disputes will either arise out of, or cause, a member’s departure. Disputes between the LLP and those who remain as members are therefore unlikely to have been the focus of the parties’ attention; and I can think of no cogent commercial reason why the dispute resolution process should depend on the date when the dispute happens to arise.

“Neither can I can find any reason for that conclusion in the words of the clause.”

Mr Anderson said he was “unpersuaded” by the submission from Mr Backos’s counsel that it made “no commercial sense” for a former member to come to London to “participate in an expensive arbitration”.

That outcome lacked “commercial appeal” for Mr Backos, he observed, but the “factual matrix” was known to the parties when they entered the agreement.

The judge concluded that the word ‘member’ in the agreement included “someone who was a member when the events occurred”.

A spokesman for WFW said: “As this ruling relates to an ongoing matter, we have no comment to make at present.”

This article has been amended to make clear that the arbitrator and High Court decisions concerned solely the issue of jurisdiction and not the underlying dispute.