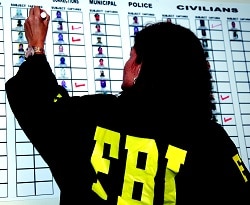 The former partner whose conduct in a dubious investment scheme led to the record £500,000 fine for US law firm Locke Lord last year has been struck off by the Solicitors Disciplinary Tribunal (SDT).

Multiple allegations against Jonathan Denton – including that he acted dishonestly – were found proven and it emerged that he is now also facing criminal charges.

Last November, Locke Lord accepted the £500,000 fine over its failure to stop Mr Denton. It also became the first law firm to found to have lacked integrity.

Mr Denton had sought to adjourn the SDT hearing on the ground that North Yorkshire Police had confirmed that he would shortly stand trial on two charges of fraud.

However, in balancing the risk of prejudice to Mr Denton with its duty to protect the public and the reputation of the profession, the tribunal decided that it could proceed by hearing his evidence in private and not reference its detail in a full written ruling until after the trial concluded.

In any case, he chose not to attend, or be represented at, the hearing.

In late summer 2012, Mr Denton began to act on a series of transactions for companies called Ikaya and Slonne. He was the sole director of the former, with his wife the company secretary.

He acted for them until 2015 – Locke Lord even allowed him to continue doing so during his gardening leave – and over that time seven trusts were established with the two companies as trustees.

Through these they purported to operate a scheme where investors’ money provided security for a line of credit much larger than the security fund. A trader was to purchase a medium-term note which could then be sold on, discharging the debt and creating a profit for investors.

The scheme promised that whilst the margins were small, the sums involved were substantial and so generated a significant profit, with the invested funds not at risk unless the bank failed.

In all, more than £40m passed through Locke Lord’s client account in different currencies. Some of it was paid away to unrelated third parties – including a Buddhist retreat in the Andalusian mountains – some was paid as ‘profit’ to other investors, and some was used to repay investor capital.

Seven allegations were made and upheld against Mr Denton. The SDT said he had undertaken no due diligence on behalf of clients and encouraged them to invest in a venture that bore the hallmarks of being a dubious investment scheme “from the outset”, in breach of several SRA Principles.

It continued: “[He] had numerous opportunities to withdraw from the investment schemes and safeguard his clients’ monies.

“Instead, he offered false assurances as to the progress of the transactions and paid non-existent ‘profits’ to some of the investors. He continued to receive monies in and monies out of the trusts despite the red flags.”

These red flags included the firm being contacted by both the FBI and the Metropolitan Police. It was, the tribunal said, “inconceivable” that Mr Denton did not recognise the dubious nature of the schemes.

Other findings included that he misled third parties, failed to protect client money, and acted in conflicts of interest. These included a conflict with his employer – as the director of Ikaya, he wanted to keep legal fees down, but as an employee of Locke Lord, he was rewarded with a bonus if a certain amount was billed.

Indeed, the SDT noted that Mr Denton signed the retainer on behalf of both firm and client.

Deciding to strike him off, the tribunal found that Mr Denton’s conduct was motivated by financial gain and was “a flagrant breach of trust placed in him by his clients and investors who relied on his status as a solicitor”.

He had also caused “significant harm” to individual investors, who had lost substantial amounts of money and some of whom were left suffering severe financial difficulties.

“The harm he had caused to the reputation of the profession was immeasurable. His conduct demonstrated a complete departure from the standards of integrity, probity and trustworthiness expected of a solicitor.

“The seriousness of his misconduct was aggravated by his proven dishonesty.”

It emerged last year that Locke Lord and its insurer have already paid out millions of pounds to settle claims brought by investors.