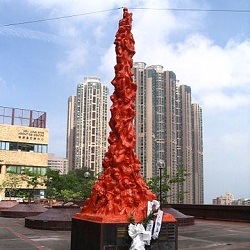 The Pillar of Shame

Hong Kong’s former leader has called for a China-wide boycott of global law firm Mayer Brown after it stopped advising a client on removing a statue commemorating the Tiananmen Square massacre.

Leung Chun-ying, who was Hong Kong chief executive from 2012 to 2017, accused the firm of bowing to political pressure.

US-headquartered Mayer Brown initially defended its work for Hong Kong University in seeking to remove the ‘Pillar of Shame’, a sculpture that has stood on the campus for 24 years and is the last Tiananmen commemoration on Chinese soil.

It said: “We were asked to provide a specific service on a real estate matter for our long-term client, the University of Hong Kong.

“Our role as outside counsel is to help our clients understand and comply with current law. Our legal advice is not intended as commentary on current or historical events.”

But the firm came under pressure from multiple directions, with 28 non-governmental organisations in Hong Kong signing an open letter that noted the firm’s stated mission of encouraging and enabling its lawyers and business services “to play a role in making a positive difference in the lives of others”.

The letter went on: “For the Mayer Brown law firm to demand that it be removed after all these years when there had been no objections from the university officials nor from the student body in the past, shows that Mayer Brown has violated its stated mission to make a positive difference in the lives of citizens in Hong Kong.”

The Danish sculptor who crafted the work, Jens Galschiøt, accused the firm of hypocrisy and two high-profile Republican senators in the US also hit out.

Lindsey Graham was quoted as saying: “It is even worse American law firms are doing the bidding of the Communist Party to erase the memory of the brave, young Chinese students who gave their lives for freedom in Tiananmen Square.”

Ted Cruz added that “American firms should be ashamed to be complicit” in the removal of the monument.

The firm then u-turned, issuing a statement to the Washington Post that said: “Going forward, Mayer Brown will not be representing its long-time client in this matter. We have no further comment.” 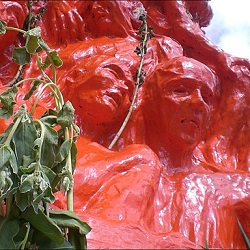 A close-up of the Pillar of Shame

Mr Galschiøt responded: “Following this victory over Mayer Brown, it will be almost impossible in the future for a Western law firm to represent and help the Chinese government and Hong Kong organisation to suppress freedom of expression and human rights without suffering severe damage to their reputation and image.”

However, Mr Leung wrote on Facebook that “no law firm, having taken on an instruction, should cease to act for its client because of foreign political pressure”.

He went on: “Mayer Brown abandoned its client Hong Kong Univeristy, as widely reported, due to American and European political pressure at a critical juncture of the case. They have not denied such reports.

“From here on, no client in Hong Kong or Mainland China, particularly those with Chinese government connections, will find Mayer Brown dependable.

“Yes I am calling for a China-wide boycott of Mayer Brown. The firm owes Hong Kong a full account of its decision to cease to act for Hong Kong University, and of the foreign interventions leading to that decision.

“Also, I believe the Hong Kong Law Society should conduct an investigation.”

The law society’s president, CM Chan, wrote in a circular that he was aware “some members have been harassed for acting for clients in certain matters”. He did not specify who or what he was referring to.

It was inevitable that some solicitors in Hong Kong would handle “matters that arise from controversial political or social events”, he said, but solicitors were “simply fulfilling their role in upholding the proper administration of justice” in following instructions and acting in their clients’ best interests.

He concluded: “Any attempt of doxxing to smear the reputation of law firms or lawyers because they happen to represent parties with different political views must be condemned.”

Mayer Brown has not responded to requests for comment on Mr Leung’s statement.