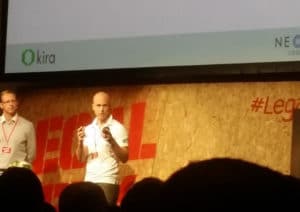 Basic digital housekeeping like keeping software up-to-date and backing up data separately from your network will solve most cyber-security issues – with corporate espionage one issue law firms have to face – according to a former assistant director of the US Federal Bureau of Investigation (FBI).

Speaking at Tuesday’s Legal Geek conference in London, John Boles, who directed the FBI’s global cyber operations and investigations during his 21-year career with the agency, said the cyber threat was real and “as bad as everybody says”.

He reported that during his time at the FBI, in the US alone there were over 6,000 active cases of cyber attack at any given time, ranging from ransomware and malware, to DDOS (denial of service). But these were “only the tip of the iceberg”, he said, because most attacks went unreported.

He said law firms were susceptible to attempted corporate espionage, especially if they were involved in “antagonistic cases”. He added: “It’s not uncommon for folks to be trying to find out what the other side’s thinking”.

But he said that much of the cyber-security battle could be won if firms “do the basics”. This included updating and regularly implementing software ‘patches’ provided by the vendor – aimed at removing security vulnerabilities.

Also, since ransomware attacks often targeted network-connected devices for encryption until a ransom was paid to unencrypt them, it was common sense to keep back-ups separate, he said. Firms should also keep passwords secure and ask themselves “does everyone in [the] company need to have access?”

Everyday software added to networks sometimes “shipped with security settings set to low or zero”, which needed customising on installation, he warned.

Mr Boles concluded: “The bad guys are out there and are thinking how can they monetise your data quicker than you can… Nobody loves your data like you love your data. It’s your crown jewels.”

Meanwhile, also at the conference, Noah Waisberg and Greg Wildisen, respectively the chief executive and international managing director of artificial intelligence (AI) software providers Kira Systems and Neota Logic, which are used by legal firms around the world to process documents and data, gave a joint presentation.

The pair described a phenomenon called ‘bricolage’, which is the use of more than one AI system in sequence to create a more powerful data refinement tool.

that in of themselves do useful things” but when put together they “do even smarter things”.

He said: “Kira and Neota are terrific in their own right [but] actually when you think about ideas and combine them, the sum of the parts is even greater than the individual pieces”.

Mr Waisberg said bricolage meant “clients [are] able to extend systems without even the vendor knowing that’s happening… our clients can dream up ways to use our systems… and build them into something greater than we would ever have thought of doing ourselves”.

Elsewhere at the conference, an eight-product competitive pitch for the 2017 Legal Geek start-up award was won by AI-enabled contract management platform, Juro. The runner-up was F-LEX, an on-demand legal service for paralegals.

Jimmy Vestbirk, the founder of Legal Geek, said Juro had had a “spectacular” year. He added that the conference was “just another example of how the legal tech sector continues to disrupt the legal industry, and make improvements to it”.

He continued: “Today’s event was twice the size of our inaugural [conference] in 2016 and that is all due to our members far and wide who continue to invest their time to meet and network with each other, swap ideas, and drive legal tech forward.”