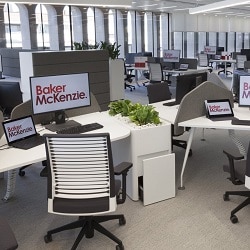 The former managing partner of the London office of Baker McKenzie is to face a disciplinary tribunal over allegations that he sexually harassed a member of staff.

Gary Senior is also accused of using his position to improperly influence the investigation into his conduct.

Further, the firm itself is to face the Solicitors Disciplinary Tribunal (SDT), as are Martin Blackburn – its former HR director – and former global litigation head Tom Cassels.

The SDT has decided that there is a case to answer and will arrange for a hearing to take place in due course. All the allegations are as yet unproven.

The events occurred in 2012, according to the notices published today by the Solicitors Regulation Authority (SRA).

Mr Senior is accused of behaving “in an inappropriate manner towards Person A in that he sought to initiate intimate activity with Person A in circumstances in which he was, and knew himself to be, in a position of authority and responsibility over Person A”.

The SRA said Mr Senior “knowingly caused Person A to be alone with him”, and told her that he was attracted to her, “Person A not having indicated that such conduct was wanted or invited”.

He then “attempted to embrace and kiss Person A, Person A not having indicated consent to such contact” and “persisted in said conduct”, despite her telling him it was not appropriate;

The second tranche of allegations are that, “by reason of his position of seniority within the firm”, Mr Senior improperly sought to influence the conduct and outcome of an investigation into his behaviour, and “to prevent information being appropriately shared within the firm as to the nature and outcome of the complaint by Person A as to his conduct”.

He is also accused of failing “promptly or at all” to report what had happened to the SRA.

The allegations against Baker McKenzie are that it allowed Mr Senior to try and influence the investigation, and “failed to cause the complaint to be effectively or independently investigated”.

Further, it is accused of failing to report to the SRA “serious misconduct by a regulated person”, having found or in the knowledge that Mr Senior “had sought to initiate intimate contact with Person A”, he had been guilty of “a serious error of judgment”, his conduct was aggravated by his seniority, he had caused harm to Person A, and he should be issued with a written warning.

Mr Blackburn – who has been UK people director at KPMG since 2014 – and Mr Cassels, a partner at Linklaters since 2015, have been charged with the same allegations as the firm.

In addition, both are alleged to have “caused or allowed communications to be made to Person A or the representatives of Person A to the effect that the firm’s investigation had been undertaken independently of influence by [Mr Senior], in circumstances in which [his] involvement in the investigation had not been disclosed”.

In a statement, Baker McKenzie said: “”As we have previously disclosed, we have been co-operating fully with the SRA since the beginning of this process last year, including sharing with them in September the full findings of the report we commissioned into the 2012 incident which was carried out last year in conjunction with the law firm Simmons & Simmons.

“It was that report which brought to light the full extent to which our internal processes fell short of what should be expected and were undermined in a way that was unacceptable and should never have happened.

“As we said last September both publicly and privately to the SRA, we fully accept there were significant shortcomings in the procedures that we followed in 2012 and subsequently.

“This is something which we very much regret. We could and should have done much better in handling the issue at the time and subsequently, and we have since introduced and reinforced robust processes to ensure these shortcomings can never be repeated.

“As a result of our review of the incident from which we are determined to learn and improve, we have enhanced our internal due diligence processes, including around the way we vet candidates for promotion in the firm.

“We have also taken steps to encourage a ‘speak up’ culture across the firm. We are confident that these changes will prevent something like this from ever happening again.”

A statement from Linklaters said: “We note the SRA’s decision to refer this matter to the SDT and Tom has the firm’s full support.

“Tom is a hugely respected and distinguished lawyer who, since joining us in 2016, has become a trusted and valued partner. He has a long track record of championing diversity initiatives, including our own internal ‘He for She’ campaign and as a mentor for the 30% Club.”