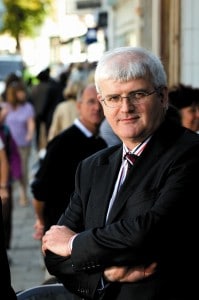 Hunt: stripping out the baggage of old-fashioned traditional law firms

Everyman Legal – the ‘virtual’ practice that last October became the first law firm to announce its intention [2] to seek admission to a stock exchange – has announced plans to pioneer “business hub franchises” for solicitors.

The aim is to help commercial solicitors set up their own practices in co-operation with other lawyers in their area.

Everyman, which will apply to become an alternative business structure this year, said it is in active discussions with a number of prospective franchisees with the intention of running three pilots in market towns over the next 12 months, and then scale up.

The firm is initially targeting market towns because of the close working relationships with other local solicitors, accountants and other business people in the community.

Each hub will be run by a leader – who will be based at the office with a support team – with other members of the Everyman team in the area able to use the hub as and when required.

The aim is to replicate Everyman’s headquarters in Witney, Oxfordshire, where founder James Hunt has 2,000 sq ft of offices, including hot-desk facilities.

Mr Hunt, a corporate solicitor, said: “There are some practice areas, like my own, which would be difficult if not impossible to undertake effectively from home. The need to work closely with solicitors and other colleagues and to work with other advisers in the Witney business community means I can only work effectively from an Everyman Legal business hub.”

The firm is currently systemising its processes, in particular the marketing and sales strategy around the Everyman Legal brand. It has appointed a leading brand and marketing consultancy to work on the project.

Mr Hunt added: “The right people will find what we are going to do very empowering. By creating the right business framework, we will free the creative talent of the best solicitors, leaving them to do what they do best: provide exceptional client service and practical legal advice.

“We will strip out the baggage of the old-fashioned traditional law firms and liberate young and mid-career solicitors who in the past would have set up their own law firms. However, with the complexity of modern business and the increasingly complex regulatory regime, setting up a law firm is a daunting prospect.”

Mr Hunt said the firm is on track to trade its shares on Sharemark – a stock market for smaller companies – in the last quarter of 2012.