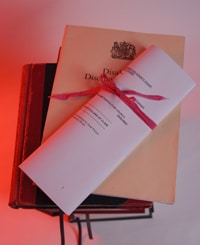 A judge has dismissed a claim by a law firm paralegal that he was the victim of disability discrimination, finding he had “dishonestly” altered a document about his medical condition and that, in any case, he had not told his employer about his supposed post-traumatic stress disorder.

Employment Judge Roper in Exeter found that Christopher Warwick was not disabled at the material time and also refused an amendment to his application to include sex discrimination.

Mr Warwick had been a case officer for South Devon criminal motoring offences firm Patterson Law. The judge said the claimant was not a credible witness.

He described Mr Warwick as “a difficult and demanding employee who took up a lot of management time”.

Judge Roper continued: “He had a poor sickness record, and his sickness absence often coincided with his partner’s absences from the office [she also worked there]. He had repeated late attendance, and he had a number of disagreements with work colleagues.

“His general performance required higher levels of supervision than ordinarily should have been the case. He would repeatedly express opposition to the respondent’s methods of working and was very demanding…

“He would return to the same subjects weeks after the matter had been concluded to continue to argue the same points. This resulted in almost daily meetings and discussions with and/or about the claimant, and not surprisingly the respondent became increasingly exasperated.”

Remote working was a particular bone of contention, with Mr Warwick repeatedly asking to work from home to avoid a lengthy commute. He cited as a comparator a valued female member of staff who had resigned when she relocated to another part of the country but was persuaded to stay on by an offer to work remotely.

His requests were denied on grounds including that his work needed proper supervision.

He resigned in August 2017 and was dismissed for gross misconduct soon afterwards due to disparaging posts about the firm that he made on social media.

He issued proceedings the following month, claiming unfair dismissal – which was refused because he had insufficient service to bring such a claim – and disability discrimination on the basis of suffering from post-traumatic stress disorder.

However, the judge found Mr Warwick failed to provide proper medical records or a statement on the impact of the disability “on anything approaching a convincing basis”

“His GP notes have not been disclosed, and the claimant suggests that this is because they may have been mislaid between different surgeries.

“His impact statement does not address any adverse affect on his normal day-to-day activities, other than to make simplistic general comments such as: ‘the symptoms continue to this day and have an impact on my daily life’.”

The evidence that was available included one report from his time at university that the judge found the claimant had “deliberately and dishonestly doctored” to show that he suffered from autism spectrum disorder.

Nonetheless, Judge Roper found that, despite the absence of a formal diagnosis and the medical records, “it seems likely on the balance of probabilities that the claimant has suffered with some mental health symptoms which were recorded from early 2012…

“However, there is no cogent evidence, and I cannot find, that during the period of his employment with the respondent, the claimant suffered from any impairment which had a substantial adverse affect on his normal day-to-day activities.

“Despite repeated and continual discussions about his work record and working practices, the claimant never reported that he had any mental illness, nor raised with the respondent the possibility of him suffering any adverse affects because of any mental impairment.”

As a result, the judge found that Mr Wright was not a disabled person within the meaning of the statutory definition – and even if he had been, “I would have dismissed his claims because of the lack of requisite knowledge by the respondent of any disability and/or any alleged substantial disadvantage”.

The judge also threw out the sex discrimination claim as “wholly without merit”, finding that the female employee who had been allowed to work remotely was “never a true comparator”.

Further, Mr Warwick’s suggestion that a position had been created by the firm for her because she was a woman was “preposterous”.

The judge made a case management order for a separate wrongful dismissal claim.