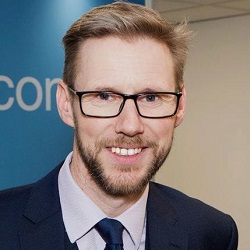 Wearing: Directors will be repaid over 10 years

A Yorkshire law firm with over 230 staff and 20 salaried partners has become 100% employee-owned after its three owners decided it was the best way to deal with succession.

Jonathan Wearing, who is managing director of Ison Harrison, said employee ownership was “by far the most palatable” option the trio considered, partly because it did not involve taking on debt.

When they were considering succession planning, Mr Wearing said the directors also looked at a management buy-out, merger or sale.

All of these options would have involved third parties. The first two would also have involved banks and debt, and the third one a “culture change, not a culture enhancement”.

Ison Harrison has 16 offices in Yorkshire and a turnover for the last calendar year of around £16m.

The other directors who sold their shares to the employee ownership trust (EOT) are finance director Richard Timperley and head of private client Dominic Mackenzie.

Mr Wearing said the fact that there were only three directors and they were all “aligned in their thinking” was crucial to the change. The EOT will repay the directors for the shares over a 10-year period.

Providing the firm makes a profit, those profits can be distributed to employees after deductions for tax, repayments to the directors and retained money for future expansion.

Mr Wearing said that, all being well, this time next year the firm would be in a position to make interim distributions to staff prior to the accounts being finalised. Employees are entitled to receive up to £3,600 tax-free.

The solicitor said the EOT allowed the law firm to appoint five new directors, not on the basis of whether they could afford to buy into the equity but of having “the right talent”.

Otherwise, he said the firm’s rapid expansion from only three offices in 2006 would have made it “expensive and inaccessible” for new owners to buy in.

The solicitor said allowing the firm to be 100% owned by its employees, rather than a lower percentage, had a “simplicity and purity” and avoided a situation where “some were more important than others”.

Despite the EOT, nothing had changed about the firm’s strategy in terms of reinvesting in the firm, opening new offices and avoiding debts and banks.

There was still plenty of room for expansion in Yorkshire, which “has more people than Scotland”, and had given the firm its “purpose and parameters”.

Mr Wearing said he hoped the move had helped “give something back” to staff and would increase their levels of involvement and engagement at a time when the law firm was “busier than it ever had been”.

Congratulating Ison Harrison, Deb Oxley, chief executive of the Employee Ownership Association, said: “At a time when many similar businesses are challenged by the succession issues presented by more traditional structures, this move roots jobs for the longer term in the communities the business serves.”

There is now a trickle of law firms adopting employee ownership.

Hodge Jones & Allen became the first law firm to be entirely owned by its employees in December 2018, transferring 100% of its shares to an EOT.

It has since been followed by London employment firm Doyle Clayton; Tapestry, a law firm in Sheffield and Leeds which advises on employee share ownership; and Oxford law firms Crossland Employment Solicitors and Hedges Law.