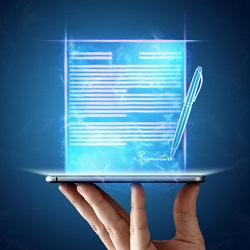 The use of electronic signatures has been the “single largest area of change” in technology for the property industry over the past 18 months, a survey has found.

The conveyancing process was viewed by most property professionals as the main source of delays in 2021, followed by property searches, though residential conveyancers put searches top of the list.

The report, The New Normal, by search provider TM Group and sales platform mio, was based on responses from 800 residential conveyancers, estate agents, lenders, surveyors and commercial real estate professionals.

When asked which new technologies they would be implementing, most professionals said electronic signatures, followed by case management tech and digital government services.

Researchers said the type of technologies adopted over the last 18 months were “driven by short-term needs rather than longer-term planning” and increased use of electronic signatures, a “good example of this”, was the “single largest area of change”.

The move was “driven both by an obvious short-term requirement and the relative ease at which such technology can be adopted” by opening an online account with leading providers.

“Beyond this, it would be reasonable to assume that the same would be true with onboarding solutions.

“Client portals are also being adopted to enable and manage online communication with customers, and those again can often be easily sourced and activated through existing search providers and others.

“However, there was a sense that bigger and more fundamental investment decisions around technology, such as case management software, had again been postponed and would be looked at in 2022.”

A government-backed industry working group said earlier this month in a report for the Law Commission that the most sophisticated kind of electronic signatures could be more reliable than signatures witnessed the traditional way.

Researchers said the conveyancing process had “come under substantial and sustained pressure” during the course of the pandemic.

“The average time taken to transact a property, which was taking almost four months prior to the pandemic, has been seen to rise to over six months according to some.

“It’s then no real surprise that respondents identified the conveyancing process itself as the single biggest cause of delays, followed by the time taken to obtain relevant property searches, as well as taking time to blame other parties.”

Researchers said many local authorities had “reduced and restricted access to their search provision”, which caused average search times to double at times.

“There were even several high-profile authorities where search times increased by over a month.

“Delays were then exacerbated by the volume of associated communication that was demanded by all parties, giving rise to the view that other parties contributed to the problem.”

Residential conveyancers ranked searches as the top source of delays, followed by the conveyancing process and “other parties in the transaction”.

When asked about the impact of the last 12 months on their businesses, the most common impact for all types of property professional was increased working hours. Conveyancers were most likely to rank this top, estate agents the least.

More than 10% of property professionals said their firm did “nothing” when it came to wellbeing initiatives. More than two thirds of these firms (68%) were residential conveyancers.

When asked which factors would have the greatest impact on their roles in 2022, consumer confidence was the most important choice for estate agents. However, for conveyancers this came in third place, behind interest rates and ‘longer term pandemic uncertainty’.