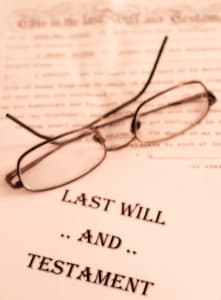 WIll writing: proudest day ever for firm

A man who tried to get a vulnerable client to loan him money – shortly after the will-writing firm he worked for became an alternative business structure (ABS) – has been banned from working in the profession after it reported him to its new regulator.

The firm, Nottingham-based The Will Writing Company (WWC), said it opted into regulation to further protect “the best interests of all of our stakeholders”, and the value was shown less than a month after its ABS licence became active.

According a decision notice published by the Solicitors Regulation Authority, on 27 June 2016 WWC employee Kevin Lockwood attended the home of 67-year-old client – who the SRA said was described by others as a “very vulnerable” person – to obtain a signature on a document.

It continued: “During the meeting, Mr Lockwood asked the client (who was not independently represented) for a substantial personal loan. The client offered to lend Mr Lockwood some of the money asked for, but no money was actually loaned. This upset the client. After the meeting, the client told his building society, who reported the matter to Mr Lockwood’s employer.”

As a result, the SRA slapped Mr Lockwood with a section 43 order, which essentially means he cannot be involved in an SRA-regulated practice except with its permission.

In a statement, WWC chief executive Tom Gormanly said: “We note the SRA’s decision in the case of Mr Lockwood. This was a very serious situation which we brought to the attention of the SRA immediately.

“We have cooperated fully with the SRA investigation and do not feel that it is appropriate for us to offer any further comment.”

WWC, which was founded in 1990, has grown to be a leading wills, probate and estate planning business; its trust company has £500m of assets under management, having only been set up in 2010.

A long-term supporter of regulation in the will-writing industry, it became an ABS regulated by the SRA on 1 June 2016, allowing its legal department to conduct reserved work such as deeds and applying for grants of probate.

The firm also took the step as added reassurance for its introducer network – it works with many regional building societies among others.

Mr Gormanly – a former chairman of the Institute of Professional Willwriters – said at the time it was his proudest day: “We have to continuously strive day in and day out to demonstrate, as we always have done, the highest standards of ethics, professionalism and customer care. We always have and we always will put our client needs first.