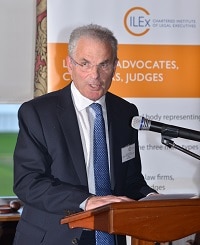 Dyson: not worried about Russian oligarchs

The Master of the Rolls has suggested that there is nothing left to cut at the Ministry of Justice in the wake of last week’s announcement that its budget is to be reduced by a further £250m [2].

Speaking at the annual president’s dinner of the Chartered Institute of Legal Executives (CILEx) last night, Lord Dyson said: “As if we were not facing enough problems, we were told last week that our unprotected department is facing further cuts of £250m.

“How that is to be achieved, we will have to wait and see. Most people in the system think that there is nothing more to cut. Now we’re being told apparently that legal aid is not going to be savaged any further… Frankly I think one needs quite a lot of imagination to think what further cuts there may be.”

Speaking in front of guests who included the Attorney General Jeremy Wright QC, and his predecessor Dominic Grieve QC, Lord Dyson added: “I wish I could say I was confident that legal aid will be restored to something like its former levels within the foreseeable future, but in all honesty I cannot do so.”

He described the reform programme at HM Courts & Tribunals Service as a “silver lining”, praising its “dynamic” chief executive Natalie Ceeney and expressing hope that online dispute resolution will be embraced.

But Lord Dyson also took the opportunity to reiterate his concerns about the recent court fee hikes, saying it was hard to believe that small businesses and individuals with claims of up to £200,000 “will not be deterred in some instances from accessing the courts”.

He was less sympathetic with those in the City who think that even big cases, such as those brought by Russian oligarchs, might be jeopardised by the higher court fees. “I find that, frankly, rather difficult to believe,” he said.

The MR said the judiciary is currently working on guidance about McKenzie Friends and will be consulting on it later in the year.

While “a good McKenzie Friend is extremely helpful in this time of litigants in person”, the “controversial question” was whether ‘professional’ McKenzie Friends should be allowed to appear.

Issues such as the absence of regulation, insurance and whether they have a duty to the court needed to be addressed “before we say yes to them, if we decide to do that”, he said.

Lord Dyson also praised the achievements of CILEx. “Your profession is growing in importance and in influence in our legal system. You should be in no doubt about that,” he said. “It really is remarkable the progress you have made in such a short space of time.”