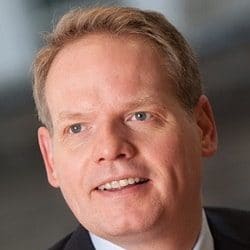 Leaitherland: Shares vest in three years if conditions are met

The chief executive and chief financial officer of listed law firm DWF have been handed more than a million shares, subject to conditions, under the group’s equity incentive plan (EIP).

Andrew Leaitherland is set to receive 779,411 shares and Chris Stefani 336,134. The shares closed yesterday at 120p, 2p lower than the price they debuted at in March.

The awards will vest after three years, in accordance with the EIP rules, subject to continued employment and the satisfaction of the performance conditions relating to earnings per share growth, return on capital employed growth and cash conversion rate.

In accordance with the EIP rules, the vested shares will then be subject to a two-year holding period before they are released.

Pre-admission, Mr Leaitherland gifted 820,000 of his existing shares to his wife and 1.7m shares to a company owned by him and his wife.

He also gifted nearly 46,000 shares to the firm’s charitable foundation; in all, the partners donated 1.8m shares to the DWF Foundation.

Mr Stefani did not hold any shares previously but was awarded a cash bonus and received 1.1 million shares on admission.

The partners still own the majority of DWF’s shares, although 2.5% of the equity was allocated as free shares to employees – subject to a certain length of service – and there is also a ‘buy as you earn’ scheme.

In addition, 10% of shares went into an employee benefit trust that can award shares based on performance and promotion, and also to help recruitment.

Mr Leaitherland receives a basic salary of £530,000, plus discretionary bonus capped at 150% of his salary and a pensions allowance equal to 7% of salary.

DWF’s maiden results as a listed company – published last month – showed its revenue for the year to 30 April 2019 grew 15% to £272m, which it said was “primarily organic… given the pause on our M&A programme required by the IPO process”.

Meanwhile, the annual general meeting of the Gordon Dadds Group yesterday approved a change in the listed firm’s name to The Ince Group.