DWF float: “Haircut” for partners but free shares for staff 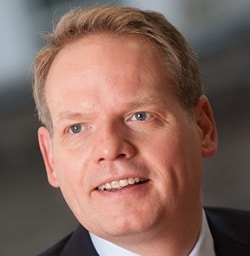 Leaitherland: Listing is about investing in firm, not partners making more money

The partners of DWF will “take a haircut” following its proposed stock market listing, but staff will receive free shares as part of the plan to widen equity participation, its chief executive has said.

Speaking to Legal Futures after the firm confirmed its intention to go public, Andrew Leaitherland said that although many other managing partners would be watching its progress closely, they would need to differentiate their business models if they wanted to follow DWF onto the market.

All of the 320 or so DWF partners will move onto a fixed profit share after the listing, with equity partners receiving 40% of their previous year’s income, and fixed-share partners 90%.

Dividends will make up some of the shortfall for equity partners, but Mr Leaitherland confirmed that they would not make as much, although this did not take account of the “capital opportunity”.

He said 2.5% of the equity will be allocated to employees – subject to a certain length of service – and there will also be ongoing opportunities, such as buy as you earn schemes.

“One of the big drivers is widening equity participation for all employees,” he said.

In addition, 10% of shares will go into an employee benefit trust that can award shares based on performance and promotion, and also to help recruitment.

Mr Leaitherland explained that the purpose of DWF was “transforming legal services, creating a different experience for our clients through our people. In order to do that, we need to invest in technology and in different delivery platforms”.

He said listing was the right structure, rather than raising debt or seeking private equity backing.

“We wanted that access to the capital markets. If we decided to do a larger transaction, for example, we would want to go back to the markets pretty quickly.”

As well as traditional legal services, DWF has a managed services business – handling high-volume work such as contracts, litigation support and transaction drafting – and connected services, made up of 12 businesses offering other services around the legal advice.

He said: “We will invest particularly in the managed services business in order to scale on a global basis, creating the right global centres with the right technology to enable us to process that business as usual law quickly and efficiently for our clients.”

In addition to the existing managed services centre in the UK and one being built in Australia, this will mean centres in Europe, the US and possibly in a lower-cost centre such India as well, “so we’ve got global 24/7 support for our clients”.

Connected services, he continued, was a “consolidation play” – there were lots of M&A opportunities that the firm would have the funding to go after.

Mr Leaitherland predicted that managing partners from other large firms would be “poring all over our prospectus to understand how we’ve gone about this”, and that DWF’s move could encourage others.

“Just saying we just want to focus on complicated law and want to deliver it in a better way than anyone else is not enough. Everyone says that.”

Firms needed a “differentiated proposition”. They had to look at it from the investor’s point of view. They would be asking: “Why would I invest in your business? How are you going to give me returns that I need?”

One issue that has long been said to put international firms off listing is the difficulties it could cause in other countries, where non-lawyer ownership of law firms is generally not allowed.

“We’ve spent months and months and fortunes making sure that our structure is compliant with the requirements of the international regulators,” Mr Leaitherland said – indeed, this was a prerequisite of a premium list on the main market.

The firm’s prospectus said that, of the countries where DWF has offices, only Australia and the UAE do not ban external ownership.

In relation to the rest, the prospectus said that, in designing the new structure and governance arrangements, the firm distinguished matters of professional duties from those concerning the general business affairs of a law firm, such as business strategy, financial management, procurement and IT.

It has confirmed to the various regulators in these countries that the new arrangements would result in local lawyers retaining control of matters falling within the scope of their professional duties and the company controlling the general business affairs, subject to the local professional duties requirement.

The prospectus said none of the regulator has objected to these arrangements.

DWF only has one office in the US, which is particularly hostile to non-lawyer ownership, although last autumn it sealed an exclusive association with Wood Smith Henning & Berman, a Los Angeles-headquartered firm with 22 offices across the country.

Mr Leaitherland said he has not yet looked for a structure that could work in US market, but added that it was “very much on the to-do list”.