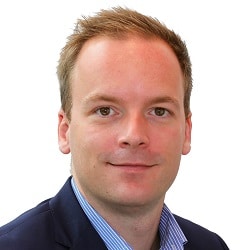 The owner of a commercial law firm based on a ”dramatically different” approach to pricing has said he believes the firm can enter the top 100 without buying other firms.

Toby Harper, sole owner and director of Harper James Solicitors, said the firm’s 37 lawyers all worked flexibly and had successfully recruited mothers returning to work by advertising on websites like Mumsnet.

Mr Harper said 65% of the firm’s clients are signed up to pricing plans. Under the Enterprise service plan, SMEs pay £189 a month for an hour’s advice plus a discount of 50% on further advice. Mr Harper said this meant most of their advice was charged at only £99 per hour.

Under the On Demand plan for larger companies, typically with turnovers of over £10m, clients ‘bulk buy’ hours – the more they buy, the lower the hourly rate. Rates start at £99 per hour.

“It’s about commitment. If you make a commitment, then we recognise that and reduce the cost.”

After qualifying at a small commercial practice in the Black Country, Mr Harper moved to what was then Shakespeares, where after a year he was seconded to a venture capital business in Birmingham.

Once he had been qualified for three years, the minimum time needed to set up your own law firm, Mr Harper launched Expert Business Advisors, trading as Harper James, in 2014.

“When I originally set up the firm, I did not have a big following. Most people who set up their own firms are further on in their careers and have a whole network of contacts. I didn’t have that.

“I wanted to create a service that was so dramatically different in the way it was priced that it would get people talking.”

Mr Harper said half of the firm’s lawyers, who are mainly from large commercial law firms or in-house roles, were employees and the rest self-employed consultants.

He said Harper James had been particularly successful at targeting mothers returning to work, by advertising on parents’ websites.

Mr Harper, who returned this week from paternity leave after the birth of his first child earlier this month, said many of the new recruits were older lawyers who had taken a career break.

Turnover at the firm for the current financial year, which ends in October would total £4m and he was hoping to increase that to £5m the following year.

Mr Harper said investment in technology would be essential to the firm’s future growth, linking all the firm’s systems together and providing a client-facing platform that could display live information on projects, costs and other content.

“It’s the sort of thing the really big firms are doing, but because of that the cost is disproportionate.”

Mr Harper said by “being brave and doing it ourselves”, his firm could produce a similar type of service for smaller businesses, but it would need investment. He said investment in technology of 5% of turnover this financial year was likely rise to 10% or 15%.

“Unless you continually evolve your offering, it is hard to thrive. I have big aspirations for this firm. At some point it will become a top 100 firm through organic growth and acquiring clients, not other law firms.

“It will take us a while to get there, but we will get there.”