"Door is open" on regulation of will-writing, Kenny says 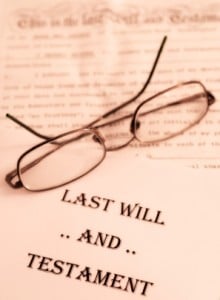 Will-writing: decision not to regulate a “missed opportunity”

The government may look again at the question of whether to regulate will-writing, the chief executive of the Legal Services Board (LSB) has indicated.

In recently released LSB papers, Chris Kenny said that a reply to LSB correspondence from justice minister Shailesh Vara “interestingly seems to leave open the door for further consideration of the will-writing issue in due course”.

Chris Grayling, the Lord Chancellor, this time last year. Instead he called for stronger voluntary regulation schemes and codes of practice.

It is believed that while the Ministry of Justice backed will-writer regulation, it could not gather support from across government.

In March this year David Edmonds, then chairman of the LSB, wrote to Mr Vara to update him on progress towards improved regulation.

In the letter, Mr Edmonds said the LSB had declined to issue “targeted guidance” on the issue to front-line regulators, as suggested by the Ministry of Justice, as this would be “akin to treating will-writing activities as reserved activities”.

However, he said the LSB had written to regulators telling them that they should identify areas of high risk for consumers and “target regulatory oversight on the riskiest firms and practices”.

Mr Edmonds said he had reminded regulators of the LSB’s research on will-writing, which “found a range of quality problems and general ‘sloppiness’” and was reviewing their responses.

Mr Edmonds said that, at an industry roundtable convened by the LSB earlier this year, “two of the leading trade bodies agreed to look into ways to exclude incompetent and dishonest firms from operating in the market”.

The former LSB chair said one of the issues raised at the event was whether amendments to the EU directive on electronic signatures would allow the Probate Service registry to accept electronic wills. “This is important because the will registry serves as an important depository for wills and is particularly useful for consumers who use unregulated providers.”

He added that it remained the LSB’s view that the government’s decision not to regulate will-writing “does represent a missed opportunity to both raise standards and to foster confidence in a more innovative and competitive market”.