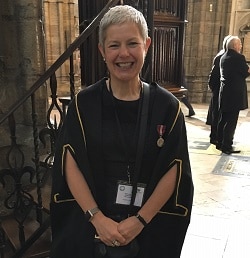 Dixon: heading back to Yorkshire

Outgoing Law Society chief executive Catherine Dixon is to take up the same role at one of the largest agricultural and further education colleges in the UK.

Askham Bryan College, which is near York, has nearly 4,000 students at sites across the north of England, from Newcastle to Wakefield and Newton Rigg College in Cumbria. Ms Dixon will join in April.

She announced her resignation from the Law Society last week after two years in the role, citing the society’s failure to embrace governance reform as the catalyst.

The college offers an extensive range of full and part-time further and higher education courses in a variety of land-based skills, such as agriculture, horticulture, animal management, equine and forestry.

Anthony Alton, chairman of the college’s board of governors, said: “We are delighted that Catherine will be joining us. She has extensive knowledge and experience across a broad range of organisations which will be of huge benefit as we begin a new era in the college’s development. We look forward to welcoming her to this important role.”

Ms Dixon added: “I am delighted to be joining as chief executive at such an important time for the college…

“I do hope that I can use my experience to assist the college during this important phase of its development. I am also very excited to return to the north and particularly, Yorkshire, my home county.”

Prior to joining the Law Society, Ms Dixon was chief executive of the NHS Litigation Authority, general counsel and company secretary at the NSPCC and commercial director at BUPA Care Services.

Originally from Hull, Ms Dixon also spent almost four years in Canada, where she was a director of the Vancouver Coastal Health Authority and an outward bound Instructor. Since 2011, she has been a trustee of the animal charity, the PDSA.

See blog: Time for the Law Society to cut the cord