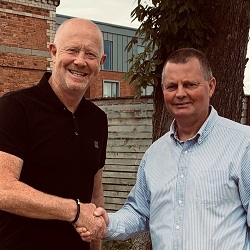 A freelance solicitor has teamed up with a former KPMG partner to launch a divorce business that guarantees its fixed-fee quote for the whole process will not change and does not take payment until the final order is signed off by the court.

Leicestershire-based Fair Result went live earlier this year and has just been joined by former Liverpool and England footballer Mark Wright as a director.

It claims to be the first business to offer a fixed fee for the entire divorce process, including ancillary relief.

It is currently unregulated but Chris Sweetman, a former criminal defence solicitor who has switched to divorce work over the past two years, said the intention was that he and accountant Peter Marples would turn it into an alternative business structure.

For now, any litigation is handled separately by Mr Sweetman as a freelance solicitor, with counsel instructed on a direct access basis for court work.

A one-time partner at Burton Copeland in Manchester, he set up his own fixed-fee practice for road traffic offences, Sweetman Solicitors, before moving to divorce work; he and Mr Marples had both gone through their “own divorce journeys” and felt there was a better way to do it.

Mr Sweetman said he expected its fixed-fee model for divorce “to be the norm in the next five years”.

“People will no longer be asked for money upfront and never asked for extra fees as the divorce limps along in the hands of people who make money billing by the hour.

“None of our clients will ever be forced to settle for less than what’s fair just because they can’t afford escalating legal costs. That’s not right and it’s just not fair.”

Key to the model, he told Legal Futures, was an upfront assessment of the “marital pot” of assets and within 24 hours the client received a fixed-fee quote which would not change under any circumstances – although if court hearings were anticipated but did not take place, the final fee would be reduced.

Counsel and valuations, if required, are paid by Fair Result out of its fee, while Mr Sweetman said that he and Mr Marples absorbed the risks of unexpected events on a “swings and roundabouts” basis.

The fact that clients were not charged until the case concluded meant “they’re not scared to wait” for the right deal – and he insisted there was nothing built into the fee to compensate Fair Result for this.

The firm’s fixed fee typically ranges from £10,000 to £30,000, and he estimated that this was generally half of the cost of traditional high street law firms as it had few overheads. It also provides a qualified life coach to support clients.

“Our aim is to get to a settlement faster because we don’t go through endless letters between solicitors arguing about things that are irrelevant,” Mr Sweetman added.

He said his relatively limited experience of divorce work was “more than enough”. He explained: “The actual law is very simple… It’s the processing that’s complicated.”

He suggested that solicitors continued to handle divorces as they always have “rather than trying to streamline the process”.

Mr Sweetman said he was introduced to Mr Wright through a client; the one-time footballer has experienced a long and drawn-out divorce process himself.

He will play “an active role” in the business, focusing on his network to support business development, particularly among current and former athletes, where the divorce rate is high.

Mr Wright said: “I wish I’d met Fair Result years ago when I went through my own divorce. Their no-nonsense approach to evaluating what’s available, and immediately negotiating a fair split of all the family assets, should be the template for how things are done moving forward.”