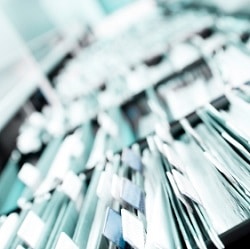 Files: Privilege maintained until there is no prospect of it being enforced

Legal professional privilege can protect the documents of a dissolved company from disclosure, the High Court has ruled in a case involving global firm Dentons.

Master Clark said the principle ‘once privileged, always privileged’ compelled the court to maintain the privilege “unless and until there is no prospect” of it being enforced.

He said the court had to determine the extent to which it “should have regard to the fact that the company could, as a matter of law, be restored”, even though the “practical likelihood of this is remote”.

Master Clark went on: “This may be tested by considering the position if an application for restoration had been made, but was not to be determined until after the hearing of this application – the court would then, in my judgment, be bound to protect the privilege which was about to be revested in the company.

“However, it is difficult to distinguish in principle between that situation and the present one, where, although no application to restore has been made, there is and will be no bar to it being made until 20 June 2036.

“Not enforcing the privilege means contemplating the position where, having been restored to the register and otherwise placed in the position it was before dissolution, the privilege to which the company should then be entitled would be irretrievably lost.”

The High Court heard in Addlesee & Others v Dentons Europe [2018] EWHC 3010 (Ch) that the claimants were 240 investors in a scheme operated by Anabus Holdings, a Cypriot company now dissolved, under which they were invited to invest in gold dust.

The claimants, who said they lost over €6.5m, sought a declaration that client files held by Dentons in respect of the company were not protected by legal professional privilege.

Master Clark dismissed the claimant’s application as it related to legal professional privilege. He added that the issue of the “so-called iniquity exception to such privilege remained an issue between the parties.