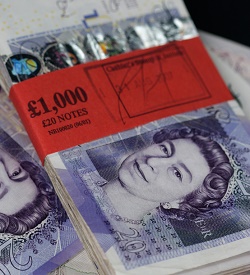 Client money: Solicitors Compensation Fund has had to pay out

A solicitor who transferred over £64,500 from client account to his personal account has been struck off by the Solicitors Disciplinary Tribunal (SDT).

Mark Anthony Whittaker was also found to have transferred £5,000 in client funds to his girlfriend, who lived in Romania.

To try and cover his tracks, Mr Whittaker described payments to himself as “fixed fees”, while describing his girlfriend as “Counsel”.

The SDT said Mr Whittaker had shown a “cavalier disregard for his professional obligations and had driven a coach and horses through the Solicitors Account Rules, with which he should have complied”.

The tribunal went on: “He had used client funds to finance his own outgoings when those funds should have been sacrosanct. His conduct had been disgraceful and he was not fit to be a member of the profession.”

The tribunal heard that Mr Whittaker was born in 1962 and admitted to the roll in 2002. The misconduct took place while he was principal of DW Law in Stevenage, Hertfordshire. The Solicitors Regulation Authority (SRA) closed the firm in December 2014.

The tribunal found that, between July and October 2014, Mr Whittaker transferred £64,500 from client account to his personal account, £8,800 to the bank accounts of third parties and made £25,150 in improper transfers to office account. He cashed client account cheques worth £4,500.

Following a request from the SRA’s forensic investigation officer, Mr Whittaker produced 77 bills of costs totalling £34,670. The officer noted that 34 had no client reference number, and the others did not correspond to any of the client ledger numbers.

The SDT said Mr Whittaker, who was believed to be living in Florida, had “failed to engage” with the proceedings.

However, in earlier interviews with the SRA’s investigating officer, he “denied there was any client account shortfall”, saying he had contacted all his clients and obtained figures from them which balanced with his client account, although he was “unable to pay his accountant to verify this”.

He claimed his bookkeeper had told him it was “perfectly fine” to take “fixed-fee payments” from client account and transfer them to his personal account.

The tribunal found he had not only made improper payments but failed to keep proper accounting records, with many ledgers and bank statements failing to record the true position.

“The payments to the respondent’s girlfriend referred to ‘Counsel’ when actually the payments had nothing to do with Counsel.”

The SDT said it was satisfied, by his concealment, that Mr Whittaker knew the funds should not have been transferred from client account and his conduct was dishonest.

The tribunal heard that he was made bankrupt in May 2014, and his practising certificate was suspended. He was found to have made the improper payments while suspended.

He was also found to have submitted false and misleading information to his firm’s indemnity insurer.

The SDT said the solicitor signed his insurance renewal form and statement of fact document in September 2014, knowing that by then he was a consultant, not a principal, partner or director of the firm, and he had no authority to do so. The tribunal was satisfied that this conduct was dishonest.

The SDT said Mr Whittaker’s actions had caused a “great deal of harm” to members of the public and payments had been made by the Compensation Fund.

The “only mitigating factors” were that he had tried to made good some of the losses by making a payment of £41,000 into client account from his own funds in November 2014, and he had an otherwise unblemished record.

The sole practitioner was struck off and ordered to pay costs of just under £17,000.