Design your website to “repel” wrong kind of client 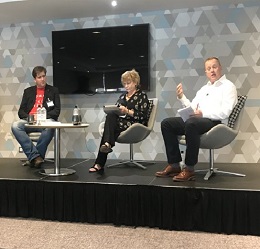 Law firms should design their websites to “repel” the kind of clients they are not interested in, the founder of a niche commercial firm has said.

Matthew Rippon, who set up Particular Legal in Newcastle, which specialises in work for start-ups, said there must be people who hated his firm’s website “because it is so in your face”.

The website, which brands the firm as *particular, features slogan headings and Soviet-style worker illustrations, saying the business was created to “start a revolution” in the delivery of legal services.

The firm’s ‘Manifesto’ – because “Every revolution needs a manifesto” – contains commitments that respond to what it says have been years of law firms sitting “on their well-padded laurels”.

Speaking at yesterday’s SRA Innovate event in Newcastle, Mr Rippon said his firm’s old website, which cost only £300 to build, was “really liked” by people but “I would get people who came in and talked to me but they were not really the right sort of people”.

Mr Rippon said the new website was designed to meet the “Marmite test”, so people would either love it or hate it.

“If you look at that website and you say ‘I’m not going anywhere near those clowns’, which many people will do, then you’re not going to waste my time by calling me,” Mr Rippon said.

“What I wanted to do is to create a website which repelled the people who didn’t get us, as much as it drew in those who did.”

Cris McCurley, a partner and domestic violence law specialist at north-east firm Ben Hoare Bell, told the same session on ‘practical innovation’ that legal aid firms were forced to innovate because of the lack of public funding, which had pared them to the bone and left nothing more to cut.

Ms McCurley said the firm was always seeking out new niche areas, such as work for LGBT people, travellers and Middle Eastern and North African women. Other specialist work streams were forced marriages – where the firm had negotiated an hourly rate rather than a fixed fee with the Ministry of Justice – female genital mutilation, slavery and trafficking.

She said the internet had been invaluable in helping her communicate with experts around the world, while the ability of victims to give evidence in court hearings via video link meant that their location need never be known.

Ms McCurley said she wanted a waiver from the Solicitors Regulation Authority (SRA) so that her name, which was “very unique”, did not have to be entered on court papers because it could help identify the location of clients if they lived near the office.

“We’ve got a work-around, but it would be good to have an acknowledged waiver for that kind of case,” she said.

Mr Rippon said traditional law firms were “ultimately built to provide those who go through them with a retirement fund”, meaning that the group of partners at the top wanted to “generate as much value as they could from the firm in their last three to four years” and “everything in a law firm becomes skewed towards that”.

However, Mr Lee said around 60% of Wavelength’s business was with law firms wanting to innovate, using artificial intelligence, machine learning and big data.

He said that although the partnership model was “not perfect” and it was sometimes difficult to get people to agree to invest in innovation, most well-run partnerships were are “pretty profitable” and “if they want to invest, they are much more able to do that than a corporate legal department”.

Mr Lee said internal competition between teams of lawyers in the big law firms, for example in real estate and corporate, could help drive innovation.

“Samsung has teams competing against each other to drive innovation,” he said.

Mr Lee described the tendency of some partners to hoard work to meet billing targets as “a leadership challenge, rather than a structural challenge.”

Mr Rippon said he never understood the problem most law firms had with fixed fees, which his firm used in around 80% of transactions.

“You get to bill when you like, so you vastly reduce lock-up,” he said. “Clients are happy if their bill is agreed at the outset. From their perspective it’s common sense.”

He said lawyers who had been doing the same work for a long time had a “pretty good idea” what it cost.

“It’s not necessarily about fixing a price for a whole job. It could be about breaking up things into steps and scoping them out carefully.”