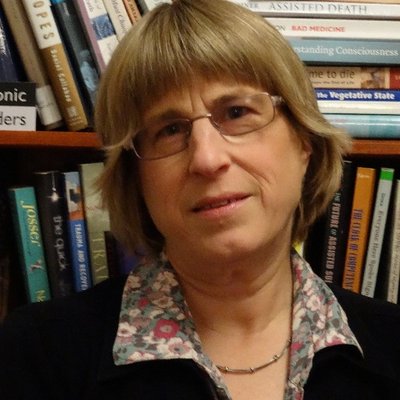 Kitzinger: Shocked by the lack of sensitivity

An academic who was present at the first Court of Protection hearing to be conducted over Skype last month has raised concerns over its impact on relatives and witnesses.

The daughter of man at the centre of the case told her: “I’m left wondering whether I should have waited and insisted on a face-to-face hearing. It just felt like a second-rate hearing.”

The observations of Professor Celia Kitzinger are a counterpoint to the generally positive experience reported by lawyers involved in remote hearings since the coronavirus crisis.

Mr Justice Mostyn, who presided over the hearing, said it proceeded “almost without a hitch”, with 17 continuously active participants plus 11 witnesses and two journalists, all of whom were “scattered” across the country.

Prof Kitzinger, co-director of the Coma and Disorders of Consciousness Research Centre, said she took part on a voluntary basis to support the daughter of a stroke victim, AF, being fed artificially through a tube.

Writing on the Transparency Project website, she said that “right from the outset”, the man’s daughter, who she referred to as ‘Sarah’, felt that her father’s wishes were not “centre-stage” at the hearing.

“Because this was the first all-Skype hearing, there was a lot of talk about managing the technology at the beginning and end of each day, and intermittently throughout the day as glitches arose and needed addressing.

“It was definitely a distraction. At times there was what felt to us like an unseemly and self-congratulatory focus about being ‘the first’ such case, about its ‘pioneering’ role in remote justice.

“Sarah said: ‘I’d like the judge and lawyers to know that this hearing was not about bigging yourselves up because you did the first Skype trial. This is about my Dad.’”

The case centred on the best interests of AF, who survived a stroke in 2016, and whether clinically assisted nutrition and hydration should be withdrawn if that were to lead to his death. The Court of Protection ruled that they should not be withdrawn.

Prof Kitzinger said there was a “marked lack of empathy displayed for Sarah throughout this hearing (Sarah’s own legal team excluded, of course)”.

She went on: “Having, for comparison, lots of experience of how judges and lawyers engage with families when they are co-present in a courtroom, I was shocked by the lack of sensitivity to what Sarah might be thinking or feeling at various points and by apparent indifference to her presence.

“This was partly – perhaps largely – accounted for by the fact that, except when Sarah was giving her witness statement and being cross-examined, she was not visible to other participants.

“Due to bandwidth problems, the judge asked everyone (except himself) to turn off video-cameras unless they were giving evidence or questioning a witness. This meant it was easy for lawyers to forget that Sarah remained in the virtual courtroom throughout the hearing.”

The academic said that during the hearing, which took place in the week before the lockdown, she was in a room with Sarah, her pro bono solicitor and barrister, trying to follow the social distancing rules.

Sarah had flown in from outside the UK, because they were expecting a face-to-face hearing at Nottingham Civil Justice Centre.

Prof Kitzinger said only those in the room “could see how upset Sarah became at various points”. Having been refused permission to be her father’s litigation friend, it “hurt” Sarah to have the Official Solicitor speak on his behalf.

She reported that Sarah said this about giving her witness statement: “In a courtroom people can see body language. They can feel the pain and emotion when you speak about that moment of utter desperation that you went through.

“But I was in a little one-inch box on a screen and being honest I bet half of them weren’t even engaged in looking at it – as the judge couldn’t monitor them to make sure they were paying attention.

“Skype took away from me the ability to look these people in the eyes – these people who have their opinions about my Dad and only knew him through third-hand notes. I wanted to look them in the eyes and make them hear the truth but I was looking at a computer screen.”

Prof Kitzinger said there were a number of practical problems that interrupted the hearing, including “intermittent loss of connectivity and delays while key people reconnected”, batteries running out on witnesses’ laptops and recording problems.

There was also an audio time lag to contend with, leading to judges and counsel accidentally interrupting witnesses.

Prof Kitzinger said “part of the chaos” was the intrusion of ‘everyday life’ into the proceedings – “the cat that mewed and knocked over books, the tail-wagging dog behind one witness, the mobile phone that kept going off on one witness’s desk”.

She said Sarah was “not impressed” by two occasions where “the judge’s dogs barked loudly and long (necessitating a short break) when someone apparently rang his doorbell”.

Prof Kitzinger added that “views of other people’s domestic interiors” could reinforce the impression that justice was administered by people with economic, educational and class privilege.

The academic said she supported the development of ‘remote’ justice, but online hearings needed to be “well-designed, well-researched and well-delivered”.

Among the issues he noted were, in one case, the defendant reading out a letter he had penned “which the judge (on the phone) conceded she did not fully hear before passing sentence”, and in another the defendant not understanding what had happened when sentenced.

Sian Harrison, editor of the PA law service, tweeted: “I’ve been impressed and reassured by the way this enforced and steep move to virtual courts has been handled by all involved. But as others have said, there needs to be proper reflection and analysis before a wholesale shift once the courts are open for business as usual.”

In a blog about open justice in the time of coronavirus, Thomas de la Mare QC of Blackstone Chambers, suggested that the pandemic “is no doubt going to accelerate massively the move towards remote delivery of justice”.

But he argued that this had to be accompanied by:

He concluded: “The breakneck speed at which the English courts have embraced a fundamentally altered court model to meet the coronavirus challenge is impressive, but some key decisions necessarily been taken with little or no opportunity for debate and with other details left open.

“Continuity of the delivery and administration of justice has been secured but now further decisions must be taken as to how to conform the new model to the demands of public access.

“Absent measures of the kind suggested above, there may be an unacceptable and unjustified impairment of the delivery of open justice for the duration of the coronavirus crisis.”