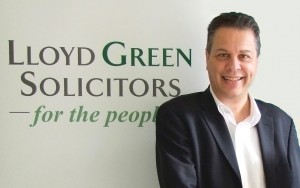 Green: new and innovative ways to promote the firm

An entrepreneurial personal injury (PI) solicitor has teamed up with his local newspaper to create a community charity funded by a substantial donation every time he receives an instruction from a member of the public.

For every PI claim made by an individual, the solicitor has pledged to donate £150 to the CACF and a similar sum to the Royal National Institute for the Blind. The newspaper will distribute the CACF money to local good causes and community groups.

Mr Green told the paper he wanted to change negative perceptions about PI lawyers and was quoted as saying “there is no shame making a claim”. He continued: “The main reason that I became a personal injury solicitor was to help people who find themselves in a bad predicament through no fault of their own; my job is to ensure that they are protected under the law.

“Fundraising for various charitable organisations has been a huge part of my life for many years now. In light of this, and particularly with the current economic climate, I believe it is imperative that we work together to help those less fortunate than ourselves.”

Speaking to Legal Futures, Mr Green added: “With ever-growing competition in the legal market and the pending changes coming on 1 April to the PI market, it is important to look for new and innovative ways to promote the firm and increase awareness.”

He also acknowledged the increasing value of law firms embedding themselves in the local community: “I think businesses rely more and more on trust from communities around them. PI firms have notoriously bad reputations for ‘ambulance chasing’; therefore being seen to give something back hopefully leads to a better all-round reputation.”

The Croydon Advertiser – a paid-for weekly that is part of the Northcliffe/Daily Mail group – covers a large swathe of south London and has an audited circulation of more than 40,000. It claims to be the third highest-selling paid-for weekly paper in London.

A story on Mr Green’s venture invited readers to e-mail its newsdesk to “make a case to receive some of the cash” and also gave contact details for the firm for anyone wth a PI claim.