Crown prosecutor with PTSD was not discrimination victim 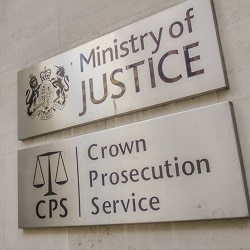 An experienced Crown prosecutor who resigned after developing post-traumatic stress order (PTSD) from being threatened at a magistrates’ court was not discriminated against, an employment tribunal has ruled.

Employment Judge George said the Crown Prosecution Service (CPS) accepted that Balbir Suri was disabled because of both an existing degenerative back condition and the PTSD.

The judge said Ms Suri – who joined the CPS in 1988 – was working as Crown prosecutor at Hendon Magistrates’ Court in October 2017 when the defendant became “increasingly agitated and angry” that his application for a restraining order to be discharged was rejected.

“When he was let out of the dock, he punched a legal adviser who fell to the ground and then lifted a chair above his head.

“The claimant, whose mobility is limited because of her back condition, reasonably thought that he was going to throw the chair at her and froze with fear.

“The legal adviser intervened, and the defendant swung the chair so it hit the protective glass of the public gallery. He ran out of the courtroom, but the claimant thought she might be attacked.”

Judge George said the police report, when the defendant was charged with using threatening words and behaviour contrary to the Public Order Act, made it clear that Ms Suri was the victim of the offence.

Ms Suri started a period of sickness absence in November 2017 from which she did not return.

A key event was the decision to hold a long-term absence review meeting with her at Hendon Magistrates’ Court in April 2018.

The tribunal found that this made Ms Suri “become upset and tearful”. She was “not comfortable in the meeting” and “suffered substantial disadvantage”.

But despite her allegation that she was pressure to resign during the meeting or told that she would be dismissed, the judge found that the CPS representative did not say anything inappropriate in the way he encouraged her to consider ways of returning to work.

But he “genuinely and reasonably” came away from the meeting with the view that Ms Suri was not able to consider a return to work at all.

She resigned soon after, making a number of complaints about her treatment. But she did not say she had been forced to resign .

Judge George said there was nothing in the letter to “cause a reasonable reader to be concerned that the decision to resign was not one that she was competent to make”.

“Our conclusion is that at the point of writing this letter the claimant’s explanation for her decision was that she feels compelled to resign rather than continue working for an employer who has failed to protect her and ignored the consequence to her of a work place injury.”

She only subsequently argued that the anxiety caused by her PTSD led her to resign.

The tribunal said it did not think Ms Suri resigned because of the meeting held at Hendon.

She then tried to withdraw her resignation, but the CPS did not allow her to do so.

Ms Suri made claims of victimisation, unlawful detriment on health and safety grounds, automatically unfair dismissal and breach of contract, all of which she later withdrew.

The tribunal rejected her claim of unfair dismissal, concluding that she had not been “coerced into resigning” and “the highest that the claimant’s case on this can reasonably be put is that fear that she might be dismissed was one of the reasons for her resignation”.

The tribunal ruled that the CPS was not in breach of its duty to make reasonable adjustments, except in the decision to hold the Hendon meeting.

“However, the correspondence after the claimant’s resignation makes clear that there were a number of other causes of her anxiety and upset than simply having met in Hendon magistrates which is never mentioned in the correspondence.

“Our conclusion therefore is that had the meeting taken place elsewhere, the claimant would still have been suffering from the effects of her condition and the same information would have been provided to her.”

On direct discrimination, Judge George said Ms Suri’s resignation was not “in the heat of the moment”, but six days after the Hendon meeting, and she had the opportunity to change her mind once she found out her initial email had gone to the wrong address.

There was no evidence to suggest that a different decision would have made in the case of a non-disabled person.