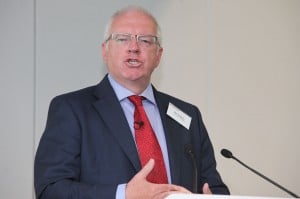 A high-powered meeting of lawyers opposed to impending criminal legal aid cuts ended on Tuesday night without agreement on a date for industrial action, despite strong support in the hall for a vote on it.

Carol Storer, director of the Legal Aid Practitioners Group, who chaired the meeting in London, dubbed Justice: Closing Down Sale – Everything must go!, said later: “I would say the rank and file members who were there were very, very clearly sending a message that they would be willing to do whatever it takes to defeat these cuts, because if the cuts come in there is no future.”

Mr Hudson was given a hostile reception by the estimated 400-plus criminal lawyers present when he defended the deal struck between the Law Society and the government under which price competitive tendering (PCT) would be dropped but the government is still pressing ahead with a 17.5% cut in fees by spring 2015.

Cuts were inevitable and it was the least bad deal available, he insisted. He warned that the justice secretary, Chris Grayling, had threatened a U-turn on PCT and that it was possible the government would revert to its original plans. The Law Society continued to oppose the cuts.

Mr Lithman told the meeting he was “shocked and disappointed” at the society’s stance and said it was dishonourable. Speaking later, he said: “They told us they were standing shoulder to shoulder with the Bar on PCT, QASA, and the cuts, so it flies in the face of that.”

He insisted the CBA was “full steam ahead”. Criminal barristers were “most likely to take action and therefore want our solicitor allies to stand with us”.

The question of whether action should coincide with the TUC’s day of action against public sector job and pay cuts on 5 November provoked concerns about linking different issues. The representative bodies agreed to consult over action, but several resolutions opposing the cuts and QASA were voted upon, and approved unanimously.

Mr Waddington said the barracking of Mr Hudson had been “unfortunate” and risked “side-tracking the main issues”. He sympathised with large organisations which could not reflect the views of all of their diverse membership.

Ms Storer said the meeting was useful in clarifying the figures in the government’s Transforming legal aid consultation, “because I think a lot of people didn’t know the detail” and they were informed that the cuts amounted to “much more than 17.5% in some parts of the country”.

She thought more barristers than solicitors had attended the meeting because “10 out of 12” speakers she called randomly were barristers.

Mr Powell told the meeting that he billed £470 in an affray case and that under the new proposals he would receive some £258. But he stunned the audience when he revealed that the bill had been submitted 35 years ago.

In relation to the charge of abandoning its pledge to stand with barristers on the cuts, a Law Society spokesman told Legal Futures: “It would be irresponsible – possibly illegal – for us to guide or suggest to our members not to accept work at the proposed new rates.”

“We have shared our assessment of the political and practical position, with all of the practitioner groups including the Bar Council. We also shared our alternative proposal and provided updates on our meetings with the Ministry of Justice during the summer. But of course we respect the Bar Council’s right to settle its own policy.”

In a related development, a Liverpool solicitor-advocate is campaigning for a motion of no confidence in the Law Society’s top officials to represent legal aid solicitors in negotiations with the government.

James Parry, a partner at Parry Welch Lacey, said he had collected a quarter of the 100 required signatures to initiate a special general meeting of the society. Last night’s meeting had generated “a lot of interest” and he was “quite confident” he would meet the threshold soon.

Separately, Mr Lithman has written to the head of all barristers’ chambers seeking their views on the percentage of their members that would be “prepared to take direct lawful action, if the fee cuts are introduced” and how many would refuse to work at the proposed very high cost case fees.

Meanwhile, the deadline for a joint survey on the financial position of criminal law firms being carried out on behalf of the Law Society and the Ministry of Justice has been extended by a week to 16 October. The results will inform the government’s decision on the number and size of duty solicitor legal aid contracts.