Criminal lawyer was “duped by fraudster” over football club deal 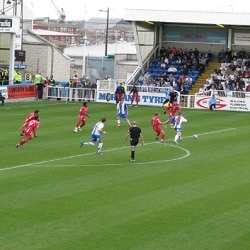 A criminal law solicitor who “appeared to have been duped by a convicted fraudster” has been fined £5,000 by the Solicitors Disciplinary Tribunal (SDT).

The SDT said the “appropriate fine” for Richard Quinn was £12,000, but it decided on a lower amount because of his debts, lack of assets and the invoices he had submitted “showing the daily rate for criminal advocacy”.

The tribunal said Mr Quinn, consultant at West Midlands criminal defence firm Riley Hayes & Co, was “sloppy” rather than premeditated in his approach to events, motivated by his desire to “get more work in” for the firm.

From November 2014 to January 2015, the tribunal said Mr Quinn drafted letters to help the fraudster, called only Mr M in the ruling, and “received payments for his work into his personal bank account”.

The SDT said he “ought to have known better in the light of his extensive experience as a solicitor during 35 years of practice”.

The tribunal said that “in the usual course of events” Mr Quinn would have been suspended for being reckless and lacking integrity “on more than one occasion”, but “on balance” mitigation militated in favour of a fine.

There was no direct harm caused as the transactions did not progress beyond initial enquiries, but this was “entirely fortuitous”.

The fact he had a previously unblemished career, “appeared to have been duped by a fraudster” and had shown “genuine insight” and “demonstrable contrition” also counted in his favour.

Mr Quinn was admitted to the roll in 1984, and before joining Riley Hayes in around 2010 was a sole practitioner conducting criminal and conveyancing work.

The SDT said Mr Quinn resigned from Riley Hayes at the turn of 2017 after the Solicitors Regulation Authority (SRA) received information from Warwickshire Police and the law firm, which had been unaware of what the solicitor had done in its name.

Mr M was convicted of fraud and given a custodial sentence of eight years in November 2017.

Mr Quinn had provided an initial statement to the police about the fraud in September 2015 and was later interviewed under caution, but he was neither arrested nor charged.

The SDT said one of the frauds related to the attempted purchase by Mr M, a businessman and former director of Swindon Town Football Club, of Hartlepool United.

Mr Quinn admitted drafting a ‘proof of funds’ letter in the name of the firm – that said he had seen evidence that Mr M had access to unencumbered funds of more than €30m – without properly verifying the background to the assurance.

He admitted acting recklessly in doing this and that he had allowed himself to be misled.

He also admitted issuing an undertaking on behalf of the firm as part of the proposed transaction, which the tribunal said was “recklessly misleading” in indicating that the firm acted for Mr M, when no retainer was in place.

The SDT accepted the solicitor’s evidence that the letter was prepared with a view to further instructions on the matter, but said his “indolent approach to opening files, failure to apply his mind to the language contained in the letter, the imprecise, sloppy and tardy approach to drafting the same caused the reckless misinterpretations to have been made”.

Further, Mr Quinn admitted not carrying out due diligence on the £266,000 payment from Mr M that was the subject of the undertaking.

A separate breach was making the firm’s client account available to receive a deposit of £250,000 from Mr M, without telling the partners or carrying out due diligence and in the absence of any retainer with Mr M.

The solicitor also admitted accepting payments of £1,250 into his own bank account from Mr M for work carried out, again without consulting the partners.

The SDT rejected SRA accusations that he had shown a “lack of candour” in dealing with Warwickshire Police and the SRA, and generally that he had been dishonest.