Crime firms’ “bad treatment” of clients will only get worse with cuts, study predicts 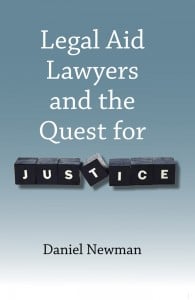 The academic who earlier this year angered criminal defence practitioners when he revealed research suggesting the firms he shadowed had mistreated their clients, has warned that the legal aid cuts planned by the Ministry of Justice will only make things worse.

But Dr Daniel Newman, who has now published a book, Legal aid lawyers and the quest for justice, stood by his findings that the lawyers were already operating under such pressure that they routinely delivered a sub-standard service, despite genuinely believing their defendant clients were being well treated.

When he wrote up an interim report in July, he claimed the lawyers he observed had lost their “moral compass” and regularly pushed clients towards early guilty pleas. This sparked a furious response from practitioners who read about the findings.

Speaking to Legal Futures, Dr Newman, a law tutor at Cardiff University, argued that the government’s planned 17.5% cuts in criminal legal aid payments by 2015 would exacerbate the problem of resentment against the system felt by many practitioners, whose attitude to clients already reflected a tendency to “kick the dog” out of frustration at the difficulties of trying to work at a profit. Further cuts would make a bad situation worse, he said.

His research involved closely observing the work of three criminal law specialist firms across a year, followed by detailed ‘exit interviews’ with the lawyers, in which he said they spoke as if their client care was exemplary, although they were well aware that he had been present. “What they said in the interview was directly opposite to what I saw in practice,” he said.

He had deliberately chosen to examine the work of radical law firms, “with high-profile partners who would often… be engaged in campaigning on criminal justice policy”, because previous research had shown these firms were more likely to resist the effect of fee cuts, even at the expense of their profit margins.

Dr Newman said he had been “saddened” by the results of his research – which his publisher said was the largest study of lawyer-client relationships for two decades. “I picked these firms so they would show me the best of what criminal legal aid had to offer [but] they showed in practice this sausage factory approach where they were just glad to churn clients out as quickly as possible, and also they seemed to genuinely dislike them.”

It was sub-conscious resentment at a system which paid them poorly that was at the heart of the problem, he explained: “My personal take on it would be that the lawyers… feel increasingly put upon by government, by legal aid remuneration, by bureaucracy, and the only way they can justify carrying on practising is to convince themselves that they still offer a gold star social welfare service, and turn themselves off to the reality that what they are actually doing is something sub-standard that they don’t actually want to admit to themselves.”

But cuts to legal aid would only worsen matters, he said. “I think any cuts are going to be disastrous because… no matter what the reality of their pay packets at the end of the month, it’s how they perceive their position financially that’s the crucial thing… so any kind of a cut is going to be disastrous in that respect.”

He continued: “The whole point of the research is to show how important criminal legal aid lawyers are to the justice system and therefore to our democracy. I think they are absolutely vital and I want to make sure it’s working properly. I don’t know that increasing fees will on their own improve the situation, but I say again and again in the book I know that cutting fees will damage it more and more. Because things were [already] threadbare, as they were when I was doing that study.”