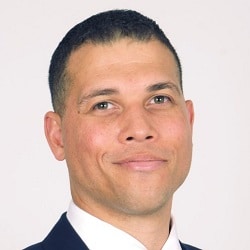 Herford: App will defuse a lot of potentially hostile situations

A new specialist criminal law firm has launched with a stop and search app that allows users to record their interaction with the police and automatically uploads it to the cloud.

This means the footage is not lost if the phone is broken or confiscated, while the app also enables users contact the firm, Legal Lifelines, directly.

It is the brainchild of Michael Herford, who told Legal Futures that he had himself been stopped and searched many times.

The app, thought to be the first of its kind created by a law firm, was “not meant to intimidate and create problems”, he said. “The police are a professional body and have been trained to conduct searches properly. If they’re not doing anything wrong, to flip the old adage on its head, what’s the problem with filming?”

He pointed out that the police had body worn cameras too, but often they not turned on or it was difficult for defence solicitors to get hold of footage.

“Normally if you’re on camera from both sides, people tend to behave more appropriately so I think it will defuse a lot of potentially hostile situations and stop allegations and counter-allegations about what happened.”

Mr Herford described the firm as a “grassroots initiative” with a strong focus on building links with community organisations and empowering Black, Asian and minority ethnic (BAME) groups by educating them about their rights on a wide range of issues, with modern slavery and protesting next on the agenda.

He has appointed non-lawyer Chimen Chauhan as head of community to help with this and creating an educational programme.

The launch was marked over the weekend with the first such event, an online debate about the disproportionate use of stop and search in the BAME community, with participants including Jo Sidhu QC, vice-chair of the Criminal Bar Association.

Mr Herford, who has a father of Black Caribbean heritage and a White English mother, said: “I myself have been stopped and searched and understand how degrading and scary it can be when protocols are not followed by those conducting the search and other invasive operations.”

He recounted one experience, before he became a lawyer, of being stopped aggressively and the officers swearing at him and holding their torches like truncheons, in what turned out to be a case of mistaken identity.

He stressed he was “not police bashing” but the statistics showed that black people were 10 times more likely to be stopped and searched than white people.

Mr Herford explained how often black people were arrested for offences other than the one they were stopped for: “If you’re stopped for the third time in a week, your politeness may not be the same as it was the first time.”

This may lead to them becoming agitated and potentially committing an offence under section 4 of the Public Order Act. This in turn criminalised people and could set them on a downward spiral.

Legal Lifelines is the latest criminal defence practice to set up on the platform created by national firm Tuckers, which handles the back-office needs and requirements.

Mr Sidhu said: “Having come from a South Asian background and growing up in Southall, I understand how import ant it is to make sure messaging cuts through to the hard to reach communities.”

He said: “I have been the victim of an invasive stop and search by police which was the result of racial profiling. I want to support the community in any way I can.

“The webinar and app are very necessary and will greatly empower the community that I am part of.”

Mr Herford said that in time he wanted to extend the firm’s offering beyond criminal law and into other areas where minority communities were likely to experience “disproportionately negative outcomes”, such as employment and immigration.

He also works as a consultant solicitor operating through Cartwright King. He anticipated building Legal Lifelines with a similar consultant model.