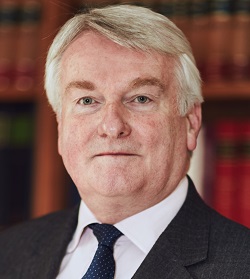 Burnett: Some online process have been outstandingly successful

The aim of the government’s £1bn court modernisation programme is to cut annual spending on the courts by £250m every year from 2022, with thousands of jobs to go, it has emerged.

Consultation papers sent to all judges and magistrates this week, seen by Legal Futures, said that around 6,500 out of 16,500 court staff would lose their jobs by 2022 and the number of courts would shrink further from the existing figure of 350 – itself a reduction from 460 a few years ago.

The paper gave the first breakdown of how the £1bn is likely to be spent, with the criminal courts taking pride of place. A dedicated £270m is to be spent on the ‘common platform’ project with the Crown Prosecution Service (CPS), allowing online pleas for criminal offences.

The platform would also enable police officers to discuss pre-charge decisions with prosecutors or request a charging decision from the CPS.

A further £230m is to be spent on modernising the criminal and civil court estate, a key demand of the Lord Chief Justice Lord Burnett, £280m on developing digital systems and £220m on other costs, such as training.

Details were given of an initial savings package of over £80m agreed between Lord Burnett, Lord Chancellor David Gauke, Senior President of Tribunals Sir Ernest Ryder, Her Majesty’s Court Service (HMCTS) and the Treasury in November last year.

The family courts are expected to save £16m from digital processes and improved ways of conducting hearings, the criminal courts £14m from online pleas, video hearings and the ‘common platform’ project.

Meanwhile, the civil courts expect to save £8m from better case management, more alternative dispute resolution, video hearings, better guidance to litigants in person and increased use of case officers.

No figure was put on how many fewer judges would be needed as a result of the modernisation programme.

The paper said only: “This does not mean that any salaried judge will be redundant, nor is there a mechanism to do so. Recruitment and deployment decisions will continue to ensure that the business need is met.”

Details of spending and savings from the Courts and Tribunals Reform Programme were set out in a shared annex to consultation papers on each of the four jurisdictions, entitled Judicial Ways of Working 2022.

In his introduction to the paper on the criminal courts, Lord Burnett said some of the online processes introduced into the system had been “outstandingly successful and provide models for the future”.

He said: “It is now time to focus on the detail of how the reforms will affect you as a judge, panel member or magistrate in the jurisdictions in which you sit.”

The paper said that under the criminal law programme, around 840,000 summary non-imprisonable offences with no identifiable victim would be “taken out of the courtroom” and heard by a single magistrate.

“In either-way and indictable offences, defendants will provide an indication of their plea online rather than in a court hearing, while judges and magistrates will, at their discretion, be able to conduct remand hearings through telephone, video link or online unless they need to be in court.

“Other elements of the model, such as partial automation of case progression, are in the process of being designed.”

In his comments on the civil jurisdiction, Sir Terence Etherton, the Master of the Rolls, said the civil courts were “some way behind other parts of the court service” in digital working.

He said there would be a roll-out of an equivalent digital case management system to that used in the Rolls Building to the Court of Appeal, High Court, Upper Tribunal and Employment Appeal Tribunal.

“The principal complaints concern the reliability of IT equipment and the absence of training of the judiciary for the use of that system.

“It should be axiomatic in future that [the reform programme] won’t work if the equipment does not, and that no digital system should be imposed on the judiciary without proper training.”

Along with what Sir Terence said was “inaccurately” referred to as the Online Court for money claims up to £25,000, a pilot scheme would start in October so possession claims which were not contested could go digital.

Meanwhile Sir James Munby, President of the Family Division, said that although full video hearings would not be “widely rolled out” for family cases, there was scope for their use in case management and directions hearings.

“The Reform teams recognise that the digital and video equipment must work effectively in all courts, and that adequate staff must be available to support its operation. This is vital and, as far as I am concerned, non-negotiable.”

Among the family law initiatives will be the launch of a pilot next summer to enable private family law litigants to initiate and manage their cases online. A similar pilot is due to start at the Court of Protection next February.

Sir Ernest Ryder, the Senior President of Tribunals said that, despite the “best performance for a decade”, tribunal justice had “experienced managed decline that is no longer sustainable”.

Among the projects aimed at transforming the tribunals will be one, starting next January, to establish “new ways of working” across the specialist tribunals, followed by another, starting next autumn, to develop an employment tribunal service which could resolve cases online and by video.