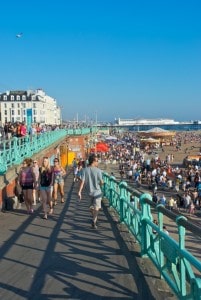 Four local authorities in the south of England are set to create an alternative business structure (ABS) in a bid to increase their income in a time of budget cuts.

They will then develop a business case to create an ABS to work alongside Orbis and handle work that the councils cannot undertake themselves.

The plan was outlined in papers approved by Brighton council last week, which said the four legal teams collectively have gross revenue budgets of £10.7m, and spend a further £2m spent each year on external legal advice. Orbis would have 232 staff, made up of 130 solicitors, 62 paralegals and 40 support staff.

The papers said Brighton had a “high performing, low cost service” but was operating a “near capacity level with limited resilience” to handle peaks in work. “The challenge in terms of capacity will be further accentuated over the coming years as the service has to deliver significant savings at the same time as when the demand for the service is likely to increase,” they said.

Brighton council is trying to cut its budget by 30% over the next four years to close a massive funding gap.

Orbis Public Law was seen as delivering savings from rationalisation and economies of scale, along with greater resilience, and more career opportunities for staff. Further, a key part of the proposal was the ability to trade and generate external income, using the Orbis’s “brand, capacity, expertise and geographical coverage”.

The papers said: “It is proposed to set up an ABS to work alongside Orbis Public Law through which legal services could be provided for public bodies beyond the core service provided to the councils.

“Expected changes to the Solicitors Regulatory Authority rules mean that such services could only be provided through an ABS, not by the authorities themselves. Without such a vehicle, the ability to generate external income will be severely restricted.

“It is intended to use the regulated company only for work that the authorities are not permitted to undertake themselves.”

Among the advantages listed for creating an ABS were that it would create “a brand/identity in the market. This could attract business and make the ABS an attractive proposition for staff, assisting with recruitment and retention issues”.

It would be set up so that the ABS did not directly employ any staff, but that the councils would make staff available to enable the ABS to undertake work.

The four legal teams currently generate around £1.5m in external income by providing services to other public sector organisations.

Only three local authority ABSs have been licensed to date: Buckinghamshire Law Plus, which combines the legal teams from the county council and Milton Keynes Fire Authority; HB Public Law, the shared legal service set up by Harrow and Barnet councils; and LGSS Law, the joint legal services departments of Northamptonshire and Cambridgeshire county councils.