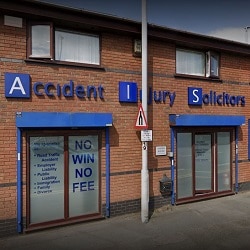 A law firm linked with 18 cases of Covid-19 was ordered to shut its office with immediate effect last week after being accused of showing “disregard” for the health of its staff.

Accident Injury Solicitors in Bolton was served with directions to close its premises by environmental health officers and will remain shut “indefinitely”, the council said, until it was satisfied that improvements have been made.

The firm has hit back both at the allegations and also the wording of Bolton council’s announcement, which made it sound like the firm itself, rather than just the office, had been closed down.

Tighter restrictions were introduced in Bolton last week to curb the virus, as the town recorded the highest rate of new cases in the country.

The council said that AI Solicitors’ office was shut down after family members of employees raised concerns.

“The family members alleged that the business was not informing staff of cases of Covid-19 in the workforce, and employees were being forced to work alongside others who had tested positive for the virus.

“On investigation the council and Public Health England found 18 cases linked to the firm.

Both authorities felt due to the large number of cases linked with the firm, the office had to close due to the imminent risk to public health.

Bolton council’s executive cabinet member for environment regulatory services, Counciller Hilary Fairclough, said: “The restrictions are clear – and in the case of this firm we had no choice but to take action.

“The firm clearly showed a disregard for the health of their staff and the wider community. We are in indebted to members of the public for letting us know about these unsafe practices.

“This council takes a zero-tolerance approach to those flouting the Covid-19 rules.”

Legal Futures has approached the firm for comment, but the Bolton News quoted a spokesman saying: “AI Solicitors takes social responsibility and the health of its employees very seriously, and takes issue with any insinuation that implies otherwise.

“It is incorrect for the council to state that the firm has been closed down indefinitely, The premises has been closed and not the business, as our employees are operating remotely from their homes and have been doing a week before the council was even aware of any issue.

“We are a locally owned and operated business and are trying our best to operate under a very unusual and tough time. We have done or utmost to follow all the guidance (which changes daily and unexpectedly) issued by the government both locally and nationally.

“We would like to go on record and publicly ask the council respectively to amend the press release which has been issued both prematurely and inaccurately. If the matter remains unresolved we are open to proceeding with legal action.”

A spokesman for the Solicitors Regulation Authority said: “We are aware of the issue and will gather all relevant information before deciding on any next steps.”