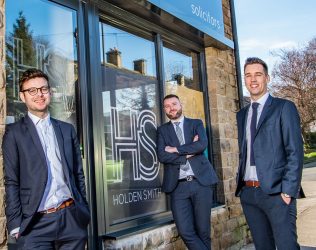 A rapidly expanding alternative business structure (ABS) which combines conveyancing and mortgage advice is expecting a record month as the property market roars back.

James Smith, the solicitor among the three founders of Holden Smith, said that since its launch last March, the firm had increased staff from three to 20, opened a second office earlier this month and was on course to double its turnover.

Mr Smith said the big volume conveyancers, based solely on technology, were “faceless” and people often preferred to “use a human”.

But whilst the smallest firms could often be “great”, the solicitor involved “might be in court for two days a week”. They could also be making little use of technology and relying entirely on letters.

“The middle ground is where we’re aiming to be – embracing technology and giving customer service.”

Holden Smith was launched in March 2019 by Mr Smith and fellow directors Dave Bancroft, previously a non-lawyer partner in Leeds firm Ison Harrison with Mr Smith, and Jamie Megson, a financial adviser who provides services as a separate business.

Earlier this month the firm opened a second office in Leeds to add to its first one in Huddersfield. A third office in Halifax is planned to open in September.

Turnover in the ABS’s first financial year was £500,000, and Mr Smith said it would exceed £1m this year, despite lockdown.

He said the firm had “invested heavily in technology from the start” and had one app to provide clients with notifications on progress and another to carry out ID checks without the need for them to visit the office.

The ID app used facial recognition technology and relied on the clients taking photos of themselves and their passports.

Mr Smith said the virus had made for a “very worrying time” in the property market, with the housing market stopping the day the lockdown was announced.

He described the firm’s technology as “a lifesaver”, allowing people to work from home.

Mr Smith said 60% of the firm’s staff were put on furlough following the lockdown, but only three were still on it and would probably be returning part-time.

He said 90% of staff were now back at work in the office, subject to social distancing.

“There’s a bit of a buzz on the conveyancing floor and people are less productive at home.

“The property market has come back with a vengeance, and this month will be a record month for us. Nobody knows if it will be a spike or not.”

Mr Smith said he thought there was particular demand in Yorkshire for homes outside the city centres and with gardens.

“There will be an economic downturn and the loans will have to be paid back. Fortunately with conveyancing work, there will always be transactional work, even if people are downsizing.”

Mr Smith said he was in favour of sellers providing more up-front property information, as proposed by the government’s Home Buying and Selling Group.

“I was a big fan of HIPs [home information packs] and I still am. It reduces the drop-out rate. We’re going back that way with the protocols firms are sending out.”

Providing the buyer with a dossier of information about the property under the Buying and Selling Property Information (BASPI) initiative and reservation agreements were about to be piloted when the lockdown struck.

But Mr Smith said he was not in favour of reservation agreements.

“We will end up with endless litigation between buyers, sellers and agents. It’s a grey area. There are differences in how people view whether there is a good title and the property is marketable.”