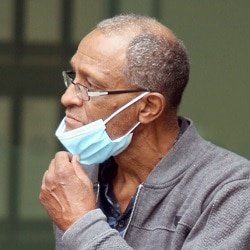 A leading conveyancer has expressed his shock after a fraudster was able to transfer money from his firm’s client account at one of his bank’s branches, despite having put safeguards in place following a similar incident a year earlier.

Ralph Aderin, 65, was last week handed a 20-month sentence suspended for 21 months, with a 30-day rehabilitation requirement, after admitting fraud by false representation, possessing identity documents with intent and three counts of possessing a control article for use in fraud.

A year earlier, Guildford property law firm The Partnership put a mandate in place that transactions on its client account were only permitted if made by two authorised persons in the bank’s Guildford branch.

But, in July 2019, Mr Aderin went into a central London branch with a fake driver’s licence that said he was Peter Ambrose, the firm’s managing director. He also had the firm’s client account details.

He transferred £9,000 but Mr Ambrose contacted the bank after he was made aware of the attempted fraud by his finance manager. Although the transaction was initially successful, the money never reached its intended destination.

Mr Aderin returned to the branch the following day to deposit into the client account two fraudulent cheques – from companies which had ordered new chequebooks but never received them – totalling nearly £13,000. He then tried to transfer out a further £8,400.

The cheques were meant to reassure the bank that the account had enough money in it for the second transfer.

This did not work, however, because the staff recognised him from the day before. They pretended checks were being were made to stall him while the police were called.

According to the prosecution, when the police arrived Mr Aderin seemed to immediately admit what he did, saying “I am just a while collar fraudster”.

The police found a false blank cheque in the name of the law firm in his possession.

Southwark Crown Court heard that Mr Aderin had a long history of honesty offences going back to the 1970s. His most recent convictions include a two-year sentence in 2016 and a suspended sentence in 2017, both involving a similar bank transfer fraud by using false identity documents.

His defence counsel said the fraudster had been on kidney dialysis twice a week since 2018 and because of his health was “terrified” of going back to prison.

Noting that this had not stopped him offending, Judge David Tomlinson told Mr Aderin: “You are now 65 and your sole vocation as a while collar fraudster is unhappily true but even that carries a sort of false air of respectability.

“‘I am just a white collar fraudster’ is exactly demonstrative of a feeling on the part of those who commit these sort of offences that the banks are strong enough to absorb that sort of damage. The reality is we all pay for what you do.”

Mr Ambrose told Legal Futures that he had put the mandate in place following a similar incident the year before, where a fraudster got away with £7,000 – which was repaid by the bank.

“We were shocked by this case,” he said. “Not only had we given those strict instructions, but the fact that a single person could draw transfer money from a client account in-branch was extraordinary.

“What made it even more curious is that we guard our client account details carefully, only providing them through a secure portal or to other solicitors with an encrypted document. It raises the question as to how the fraudster managed to obtain our bank details under the circumstances.

“This should be a warning to every law firm that fraudsters are smart and should not be underestimated.”