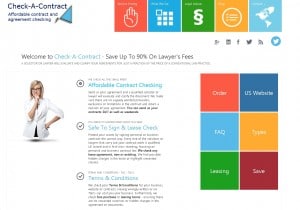 A website that connects individuals and small businesses with a panel of solicitors who review contracts for a fixed fee, has set up in the US and Canada and plans to expand into the rest of Europe.

Meanwhile, it is set to be integrated into legal contract template software to link users with the service automatically.

Check-A-Contract, which claims to offer savings of “up to 90%” on high street legal fees and says professional footballers are among its clients, uses a panel of around 40 solicitors – many of them semi-retired and on maternity leave working from home – to proof legal agreements and contracts.

The service pledges to return them to the client within 48 hours. It has no contact with clients itself and acts only as an automated referral service.

The company, based in Burgess Hill, West Sussex, has a presence in the US and Canada and plans to expand into the rest of Europe, said its founder, Ralph Ehlers.

He said that as well as legal templates, the business was planning to integrate the service into software used by the construction industry and was “also in talks to put it into the insurance and reinsurance world”.

He would not reveal the identity of the legal template software provider but said it was a “very well known, major software house” and that the “logical next step” was to have a button integrated into the product saying “you can now check that contract”.

The website was launched in October 2012 and since then growth has been “impressive”, said Mr Ehlers, but he would not be drawn on monthly figures due to the proximity of the software launch.

Clients using the service ranged from “small businesses to famous footballers who have their contracts checked” and subjects included “pre-nuptials and terms and conditions for new websites”, he said.

Mr Ehlers, who described himself as a “serial entrepreneur”, is a former chief executive of insurance industry software provider Insurecom, which in August was bought by global giant Applied Systems, the supplier of software to nine out of the top 10 largest US insurance brokers.

He predicted that law firms would “come to us to outsource work” in the future. The business as currently configured would “not make millions” but could do so if it became successful internationally, he said.

Check-A-Contract pledges that it will only employ experienced solicitors with “first-class standing” who have completed the company’s “proprietary and extensive contract training programme”. It goes on to say: “The vast majority of them are graduates from one of the top 10% of law schools in the UK; the ones that aren’t still have a proven track record of achievement.”

A 48-hour package for a contract of up to 30 pages is offered by the company for £79 with “summary with bullet points” and “redline revisions” included. A 72-hour basic package for contracts up to 20 pages costs £49 with a summary but no proposed revisions.

Mr Ehlers said that when the concept was being tested, the company ran a free advertisement on Gumtree and “300 solicitors applied within two weeks”. He had a waiting list of around 200 on hand when the business wanted to expand and “we get at least one or two a week applying” even now, he said.

He explained that the software underpinning Check-A-Contract automatically directed a client-uploaded contract to the first appropriately expert solicitor in line, and gave them three hours to accept the job after contacting them by email. Upon acceptance, the clock started ticking and the turnaround time was underwritten by the company with a money-back guarantee.

The business had only once failed to meet a client’s turnaround time, when a same-day check was required, Mr Ehlers claimed.