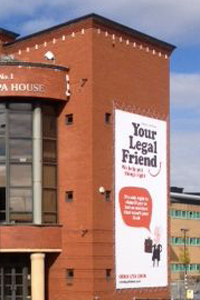 Camps goes big on promoting Your Legal Friend at its offices

Liverpool law firm Camps has launched a new consumer brand – Your Legal Friend [2] – as part of its “multi-channel” response to the personal injury market.

The well-known firm said the launch follows “extensive consumer and market research to ensure the new brand reflects both what the company stands for and delivers what its customers most value”.

The firm will still trade as Camps Solicitors in its business-to-business relationships, and all the brands are trading names of holding company 2020 Legal Ltd.

Legal Futures recently revealed that the firm has also received approval for three alternative business structures [3] with key partners who offer marketing channels to the public. The third prong of its strategy is relationships with smaller ‘marketing channel partners’, such as garages and bodyshops, which have tablet computers that enable customers to contact the firm.

Chief operating officer Colin Gibson told Legal Futures that the Camps name was “not designed to reflect our values to a consumer audience”, noting that most of the well-known brands in the personal injury market – such as National Accident Helpline and InjuryLawyers4u – do not use traditional law firm names.

He said they were “under no illusion” that it would be easy to make an impact in such a crowded market, but argued that by being “smart” Your Legal Friend could bear fruit. The research showed that people want “approachable but professional” lawyers who are able to guide them through their legal needs.

The brand would also stand out by being from a law firm, rather than “an aggregator”, he said.

Mr Gibson added that the cost of pay per click advertising – which he said has increased by up to 40% since the Jackson reforms were implemented in April – were not sustainable long term and also explained the thinking behind building a brand, using national and local press, local radio, the web and social media.

To mark the launch of Your Legal Friend, Camps has published ‘The British Health Report’ into the future of the NHS and the rise of clinical negligence claims.

It found that nearly half of doctors (44%) believe that patient care within the NHS will decline in the next five years and over a quarter (28%) are very concerned and cannot see a future for the NHS. Over a third of patients (35%) feel they have suffered poor care from a medical professional in the past. The report is the first stage in an ongoing “discussion” about healthcare standards that Camps plans to conduct as part of its campaign.