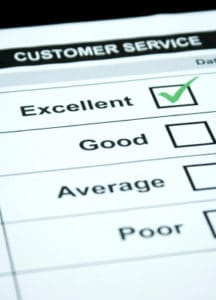 There are high levels of consumer satisfaction with legal services, according to a survey commissioned by the Competition and Markets Authority (CMA).

However, those who were not happy usually did not bother complaining because it was thought to be too time-consuming or would not achieve much.

On Friday, the CMA announced its provisional findings that a lack of transparency over price and service was hampering competition in legal services.

But the survey by IFF Research [2] of 750 people, with a series of follow-up qualitative interviews, indicated that once they had a provider, most were happy.

It found that overall 83% of respondents were either fairly or very satisfied with the quality of service received.

It said this was linked to:

IFF continued: “Consumers in the qualitative follow-ups who had reported negative experiences of using an LSP tended to associate this with the legal matter taking longer to resolve than expected; a lack of communication between the LSP and the consumer on developments in their case; the cost of the legal service being more than expected or difficult to work out; or the final outcome not being as expected/desired.”

Around two-thirds of consumers had been offered a fixed fee, but the research did find unhappiness among personal injury clients in particular with the cost information provided to them.

Both the IFF Research and a separate qualitative study [3] of small businesses carried out by Research Works said that the minority of clients who tried to shop around for a lawyer found it difficult to get hold of the information they needed. The IFF results indicated that those who did shop around were less satisfied with their provider than those who went on previous use or recommendation.

IFF said that three-quarters of those who were dissatisfied with the quality of the service or advice did not complain, most commonly because they felt it would be too time-consuming and/or that the complaint would not be resolved to their satisfaction.