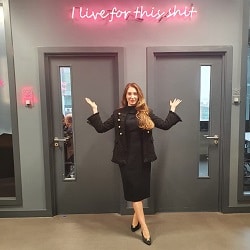 A consumer claims law firm in Liverpool that has doubled its headcount to 65 in 12 months despite Covid is set for massive expansion by trebling in size over the next two years.

But Jessica Hampson, the 32-year-old solicitor who owns CEL Solicitors, has set herself the goal of seeing if it can be done in half that time.

A former defendant lawyer, she set up CEL on 8 March 2017 with the aim of building a modern law firm which valued working mothers, and has now leased an extra floor in its office block, which can accommodate a further 120 staff.

Despite having worked for leading defendant firms like Weightmans, Parabis (as was) and DWF, Ms Hampson described herself as “always a claimant lawyer at heart”, but said it helped to understand how defendants operated.

She attributed the growth to a strong ‘people before profits’ ethos and heavy investment in technology.

The solicitor puts a huge emphasis on culture: there are twice-weekly all-staff meetings in the office’s ‘amphitheatre’, every member of staff has a ‘wellness check’ with her or another director every six weeks, and the office has fully stocked bars which open at 3.30pm on Fridays for staff to wind down.

The office also features two ‘think swings’ – swing seats where people can talk – and a pool table, while all staff sign ‘kindness contracts’. 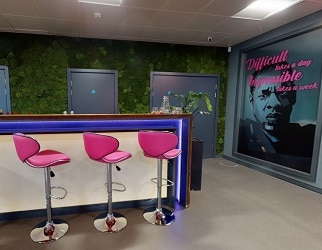 One of the three office bars

Initial plans for the new floor include a seven-metre-long aquarium, and further games and chill-out areas.

“We wanted the office to be somewhere that the team look forward to coming to,” Ms Hampson said. “Happy staff make for happy clients make for happy profits.”

This meant that, when lockdown was introduced last year, the firm still managed to record its best-ever month.

A future move, Ms Hampson said, could be some form of employee ownership, a trend that is very slowly starting to catch on in the legal profession.

She said she was not worried about growing too fast, and highlighted the role of technology and automation – “something law firms, especially in the North-West, don’t do enough” – in allowing the firm to handle high volumes of matters and scale up quickly.

“Working with Barclay Eagle Labs, we’re now exploring how we step up our already innovative approach to client-handling using technology such as AI,” Ms Hampson said.

Her husband is Paul Hampson, a director of well-known personal injury firm Hampson Hughes, but the two firms are completely separate.